At U.N., Trump calls out China over trade practices 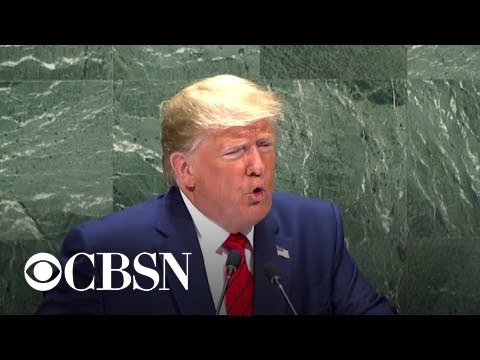 At U.N., Trump calls out China over trade practices At U.N., Trump calls out China over trade practicesNot only has China declined to adopt promised reforms, it has embraced that he conomic bottle dependent on massive Market barriers, heavy State subsidies, currency manipulator, product dumping, Sports technology transfers and the theft of intellectual property, and also trade secrets on a grand scale. As just one. The CEO of a terrific American company Micron Technology at the Whitehouse Micron, produces memory chips used in countless Electric to advance the Chinese government 5-year economic plan. A company owned by the Chinese State allegedly stole microns designs, value that up to eight seven billion dollars suing the Chinese company obtains patents for nearly an identical product and Micron was banned from selling its own Goods in China. But we are Seeking Justice. The United States lost 60,000 factories after China entered the WTO. This is half a do. Other countries all over the globe. The World Trade Organization needs drastic change. The second-largest economy in the world should not be permitted to declare itself a developing country in order to game the system at others expense. Four years these abuses were tolerated, ignored or even encouraged. Ilysm exerted a religious pull over past leaders, causing them to ignore their own National interest, but as far as America is concerned, those days are over grunty’s unfair practices. I placed massive tariffs on more than 500 billion dollars worth of chinese-made goods already. As a result, Terrace Supply chains are relocating back to America and do other nations and billions of dollars are being paid to our treasury. The American people are absolute committed to restoring balance to our relationship with China. Hopefully we can reach an agreement that would be beneficial for both countries, but, as I have made very clear, I will not occur a bad deal for the American people. Addressing the United Nations General Assembly, President Trump called on the World Trade Organization to step up its efforts to prevent China from “gaming” the global trade system. Watch his remarks.