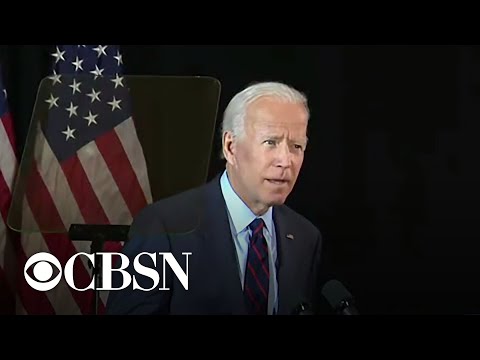 Biden says Trump should be impeached if he doesn’t comply with Congress Biden says Trump should be impeached if he doesn’t comply with CongressVery Sam, all right, I will stand by and listening to what Joe Biden has to say at the center of much of this controversy with Ukrainian president are very democracy, always a risk in advance, even clear, not only me, but I think everyone Fresno believes he can Do anything and get away with it over president, who believes he’s Above the Law pursuing the leader of another Nation to investigate a political opponent, Help win his election is not the conduct of an American, the allegations that blocked hundreds of millions of dollars. He blocked hundred million dollars in congressionally approved a to another country, and it’s an allegation unless they agreed to smear is not the conduct of American president denying Congress information which it is constitutionally entitled to an obstructed to investigate actions is not for conduct American president power. It undermines our national security and violates his oath of office and responsibilities National interest before personal interest. I knew when I decided to run this President would attacked me and anyone else. We thought it would be a threat to his winning again. Well, that’s what he does. It’S what he’s always done and even though every reputable publication is look at the charge that has been made against me at a found, the baseless and untrue and without Merit, that’s not about to stop him. I can take the political attacks, they’ll come and they’ll go and in time they will soon be forgotten, but if we allow a present to get away with a shredding United States Constitution that will last forever too many people. So many good decent people have taken the oath to this nation and given their lives over the past 243 years to let that happen to people or 7, this nation right now and honoring the taken to let that happen. This isn’t a democratic issue or republican issue. It is a national issue, it is a security issue, this time, including a copy, the formal complaint made by The Whistleblower and it’s time for the Congress to fully investigate the conduct of this president. The president should stop stonewalling. This investigation, all the other investigations who is alleged wrongdoing using spoke Constitution Authority Congress, in my view, should demand the information. It is a legal right to receive the Congress requesting the Congress. He continues to obstruct Congress and flout the law. Donald Trump will leave Congress. In my view, no choice but to initiate impeachment that would be a tragedy for the tragedy of his make it I’ve always believed and still do that America is a truly special and unique nation better than any other nation. In history, we have made Express self government work, we’ve always been a beacon to other countries around the world. We know who Donald Trump is it’s time to. Let the world know who we are. Thank you very much. Former Vice President Joe Biden spoke about allegations that President Trump may have pressured Ukraine’s leader to investigate Biden and his son Hunter’s business dealings. Biden said the president should only be impeached if he continues to stonewall Congress. Watch his remarks.