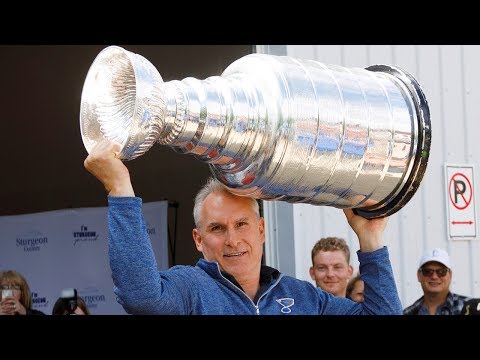 Blues coach brings Stanley Cup home to Calahoo Blues coach brings Stanley Cup home to CalahooWhat a proud moment that was for Craig’s Aruba yesterday, the head coach of the St Louis Blues by Hero in his hometown of calahoo Alberta, hello, just 85 people, that’s the official population, but there were more than 2,000 there to see coach Hoist the Stanley Cup right In front of him such a big moment, we had to find out about as of two of the people who were there are with me now, father and son, on the right, Alan Chapman, who is the president of the CR Knights, Minor Hockey Association hi, Dad on The left is the big forward number 11 for the c r Knight son Brian, Welcome to our show Brian too nice to see you both thank you for being here, because we want to find out more about what happened side of calahoo or it was intense. It was inspirational and there’s a lot of gratitude from the people there that you don’t coach. Ruby would share his day with the cup with our community and our Hockey Association and then just everybody in general. It was awesome to describe the yesterday Brian when the coach, when coach Berube was there with the cop when he raised it as we were just looking at. It will look at it again when he put it over his head and the crowd went Bonkers and cheer something else. It’S something you probably won’t ever get to see again just kind of nice to know that it happened and everybody was supporting. Mr Berube and he chose to share. is just really awesome. People wanting to get pictures and we have some pictures from you because you did get close enough. Not everybody did, as I understand it. If we take a look at it at your pictures, family shots because Allen, you were there with the all for your boys and they are Alan. Tell me a little bit about how beautiful she is Superstition, but the cup was cold, but there anything else to do. For you look at that the whole family that is fantastic, you’re, going to have to get that framed and put that up from Italy at home Allen. The coach was saying you don’t have to be a st. Louis Blues, fan to really appreciate this moment, because the Stanley Cup is so important. What does it represent when you see somebody aspire to it and yet it? It just inspires success in every level. No matter what you do, there was a young fellow speak he’s doing very well. Hockey player was a young man, but as a player I mean seeing that that’s the Holy Grail, Mister Ruby decided to bring it there because he’s growing up through the kaohu Hockey Association and he still got tons of friends there who know him personally and tons of Family there, so just him bring it. The community is really just kind of amazing to me just it’s just I don’t know how to describe it inspiring from that regard. I guess: does it at your your season’s over I’m guessing bridesmaids makes you as a player, makes you want to get back and do some of that off-ice training and get ready for next season skate even harder and faster. What do you think basically, because he’s the president of your team and your Club? You know that the funds are to be a statue of him hoisting. The cup. Much like was Wayne. Gretzky has a statue in Edmonton that we can never say that nothing. Big ever happens in a small town, because this is just about as big as it gets and thanks for taking it inside that line to to share beside calahoo Alberta and in the crowd for all of that yesterday, here on CBC News Network, St. Louis Blues head coach Craig Berube brought the Stanley Cup home to the tiny hamlet of Calahoo, Alta., crowding inside the town’s arena to bring its usual population of 85 to more than 2,000. Allen Chatten, president of the CR Knights Minor Hockey Association, and his son Bryan were there.