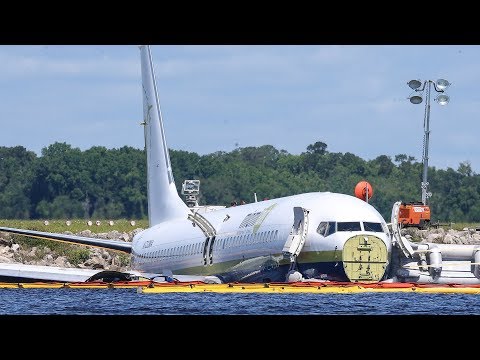 Boeing 737 slides off runway into Florida river Boeing 737 slides off runway into Florida riverLet’S go back now to that terrifying ordeal in Florida this morning, a plane carrying more than 140 passengers and crew, get it off of Runway and into a nearby River Lauren McClelland is following this for us more details coming in this morning, but this all happened last. It’S writing. What we’re hearing is. The plane was Landing, but it was a hard landing and passengers are describing how the plane seem to bounce on the runway before it did skit off into a nearby River. These are some pictures from the scene last night. Now we need changes that you’ll be able to stay just sold at water around the plane. It didn’t become submerged, it just would have said at that level in the river and the passenger was able to get out, but I want to show you exactly where this unfolded. This was a child applying. It was carrying Korean civilians from Guantanamo Bay, Cuba to Jacksonville Florida to a naval air base there, and that’s where this all occurred and a passenger is spoken about what happened once it’s cut it off the Runway. She is what she said find the wing we were in water. We couldn’t tell where we were, whether it was a river or an ocean. There was rain coming down, there was lightning and thunder. Do it on that wing, for it is time the rescue team. Eventually, somebody inflated a life raft that has been on the plane and we began climbing into it. Just imagine what that’s like it: kind of cool to mine, the Hudson River plane landing to standing on the wing of the plane, waiting to be rescued. What we do know is that once they were rescued, 21 people were taken to hospital, but we hearing they had only minor injuries, just cuts and scrapes, and then is this was a really close cold. I know how lucky Iran was his a spokesman from the Navy say about the you know: the professionalism of the folks that helped the passengers off the airplane. There’S a lot to say about about that. Cuz. If you very well could be worse, but we hearing that there was thunderstorms, it was lightning at the time, so it’s possible that the runway was slick from Ryan. We also know that the plane was late to depart from Cuba because it had an air conditioning issue. It something else will be looked at in the investigation. What is now underway Transportation safety board, taking the leaves are they getting help from following which, of course, manufacturer does playing as well president of Mackey International, which is an aviation consulting firm? We reached him in Florida. This morning he thank you for joining us about what happened here was weather related. There was some scattered thunderstorms in the area, that’ll be a question they’ll be looking at the point where he touchdown on the runway. Normally, we would expect the first very adequate Runway. The airplane over ran the end of the runway. My guess would be about 400 m through some grass and gravel before it reached the river and then had sufficient momentum to continue rolling into the river at least the length of the airplane. So there are a lot of questions that need to be answered as to why this happened: an overshoot the runway by so much when it’s already such a lengthy Runway. How likely is it for something like this to happen? Call the touchdown Zone. There would have been plenty of Runway remaining to stop, so we’re going to be trying to determine why that didn’t happen, or if he did touchdown in the proper zone, why he didn’t have sufficient reverse thrust breaking to be able to stop the airplane. Normally, the airplanes should have not even needed the 9000 feet of Runway available to be able to land safely storms at the time. Can you break it down for us for those of us who don’t have the expertise, how bad weather like that can impact the landing at 4 of a flight like this? They are more easily. The aircraft does have an anti-skid braking system install. It sounds very quickly right over the area and changes the direction of the wind over the NFI, dad and wind-shear has been detected. The pilot would have been notified, so the question will be arised: did the airport have windshield detection capability and, if so, what the crew notified of possible windshear if in fact exist? A charter plane carrying 143 people and travelling from Cuba to north Florida ended up in a river at the end of a runway Friday night, though no critical injuries or deaths were reported, officials said.