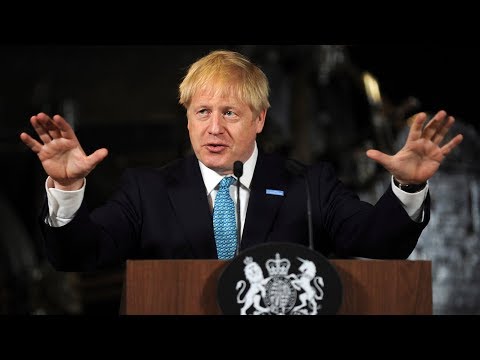 Boris Johnson visits Northern Ireland for the first time as Brexit saga drags on Boris Johnson visits Northern Ireland for the first time as Brexit saga drags onBoris Johnson, his first visit to Northern Ireland This Morning, Britain Unity, One can going around the UK to the constituent Nations that compose the UK and basically preaching that the UK. In order to leave the EU successfully must be a United United Kingdom in in Scotland. He got pushed back on that in Wales. You got pushed back not expect to get some pushback in Northern Ireland, of course, Northern Ireland and Ireland that border between the two of them. This is the real contentious issue in brexit right now, the so-called back. Stop the deal that effectively keeps Northern Ireland in the EU you to ensure that there’s no hard border there there isn’t a return to barricades and possibly soldiers at some point. This is a very contentious issue in Northern Ireland. Yesterday the Irish Prime Minister told Boris Johnson that there will be no brexit deal with the. If not backstop is taken away. Is Boris Johnson’s preaching in Belfast? He answering some questions on that and says he still thinks that it’s possible to get a deal without the backstop a little bit, and I think the stress is that I obviously attached huge importance to the letter spirits of the of the Belfast Good Friday agreement. So what you’re basically hearing him say there is that, even with a no deal brexit, he thinks at that border can remain free and open, clear of any sort of border crossings guards barricades. What have you, but just how that would happen. How. work is not very clear: the entire United Kingdom brexit even brexit supporters. Many of them don’t want to go along with the idea that the UK could just crash out of the EU as Boris Johnson is proposing a single take the the UK out of the EU October 30th, no matter whatsoever in Scotland. He heard from the first Minister. There who insisted that Scotland didn’t vote for brexit in the first place, has not voted for Boris Johnson as prime minister and is not willing to just crash out of the EU the prospect of another Scottish referendum. Wales. He heard summer things not the threat of a referendum, buddy heard from leadership in Wales and from many business groups there that they don’t want to crash out of the EU and you’ll, hear that and today in Northern Ireland. And, of course, there is the prime minister of Ireland’s comments as well saying that no deal without the backstop so he’s up against some very hard domestic opposition here, and this is all trans sing into the economy. Here you take a look. The British pound now has been trading at a low, for the last couple of days is expected to could even go lower, as Traders and investors are taking a look at what’s becoming the real kind of hard line Ocean between the UK under Boris Johnson and the Eu which says it’s not going to renegotiate the withdrawals, you Boris Johnson is paying his first visit to Northern Ireland this morning since taking over as U.K. prime minister. It’s the final leg of his so-called Unity tour, which has taken the freshly minted leader to Scotland and Wales.
To read more: http://cbc.ca/1.5230157