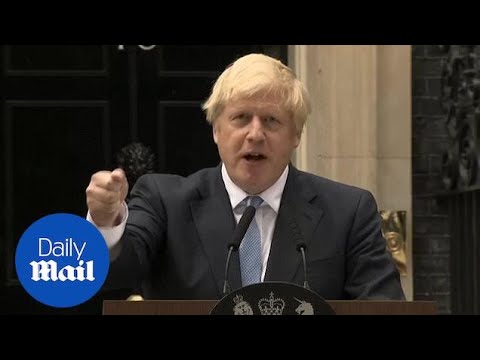 Boris Johnson’s Downing Street Brexit speech in full Boris Johnson’s Downing Street Brexit speech in full5 weeks ago I spoke to you from the steps, but this government was not going to hang around until the priorities of the British people until I’m proud to say that on Wednesday Johnson the Sajid Javid is going to send out the most vicious spending grand for Moving a different, I said I wanted to make your own streets, and that is why we are recruiting another 20,000 police officers. I said I wanted to improve your hospital waiting time at your GP and so via doing print emu upgrades in addition to the 34 billion more into the NHS, and I said I want every child in this country – I’m spending much more next year in both primary And secondary schools and it’s to push forward this agenda on these and many other friends that we need a queen’s speech in October while leaving and has become too that I’m encouraged by the progress we are making in the last few weeks. The chances of a deal for being Rising, they can see what we want to deal. They can see the future relationship actually determined to strengthen our position by getting ready to come out regardless come with me, but it’s in peace may find some way to cancel the referendum tomorrow and peas with Jeremy corbyn forget another pointless delay. Did they win if they do they make any further negotiation, absolutely impossible? The show all friends in Brussels that we are united in our purpose and peace treaty with the government against kovels pointless July. Everybody tonight today we’re leaving on the 31st of October know if robots. We will not accept any attempt to go back scrub that referendum without conviction. I believe we will get a deal at that crucial Summit in October to scrutinize in the meantime, especially with that work with that Sword of Damocles over there. Next, and without an election without an election, I didn’t want connection with the people’s agenda: fighting crime, improving the NHS, the entire United Kingdom with infrastructure, education and Technology. It is a massive agenda, let’s come together and get it done and get it done by October 30th. Thank you very much. Boris Johnson faces a showdown in Parliament today after he vowed to push for a snap general election if rebel MPs succeed in a bid to seize control of parliamentary proceedings. Parliament returns this afternoon at 2.30pm after recess, with MPs looking to take control of Commons business to allow them to discuss proposed legislation to block a no-deal Brexit. Addressing the nation outside Number 10, the Prime Minister insisted “I don’t want an election, you don’t want an election” but moments later a senior Government source said any bid to “wreck” the UK’s negotiating position would prompt a motion for an early election on October 14. Calling an election then would mean Mr Johnson could campaign on his Brexit strategy and return to Brussels with his own fresh mandate for leaving the EU with or without a deal. Rebel leaders are confident they can win the vote tonight. If they seize the order paper tomorrow, the bill will come before the Commons tomorrow from 3pm. It has to pass the Commons, and the Lords, by Thursday.