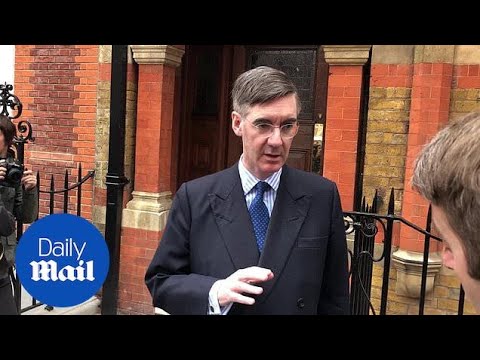 Brexiteer Jacob Rees-Mogg hopes DUP will come around to May’s deal Brexiteer Jacob Rees-Mogg hopes DUP will come around to May’s dealWait to see what they do. I actually made My Views best TIG on Monday and the Beast The Prime Minister caved in to Brexiteers including Boris Johnson who demanded a promise to quit and a new leadership election in return for support for her EU divorce. But it may all have been in vain for Mrs May after up to 25 ERG ‘Spartans’ refused to budge and the 10 DUP MPs also turned their backs on her. Tory rebel Mark Francois said today: ‘I wouldn’t vote for it if they put a shotgun in my mouth. I am not voting for the deal on the basis of who is or is not the Prime Minister. I am not voting for the deal because I have read it. Yesterday, in a highly-charged speech, Mrs May told Tory MPs she would quit ‘earlier than intended’ if Parliament backed her withdrawal agreement. There were initial signs that her gamble might pay off when a string of Eurosceptic MPs, led by Boris Johnson and Iain Duncan Smith, said they would now swing behind her. But, in a bombshell announcement shortly before 9pm, the DUP’s leader Arlene Foster (right) said the party would not support the agreement because it posed ‘an unacceptable risk to the integrity of the UK’. If her deal now fails then Parliament is likely to demand she asks the EU for a softer Brexit or draw up a second referendum – and the PM would then be expected to call a general election because it would tear up the Tory manifesto.