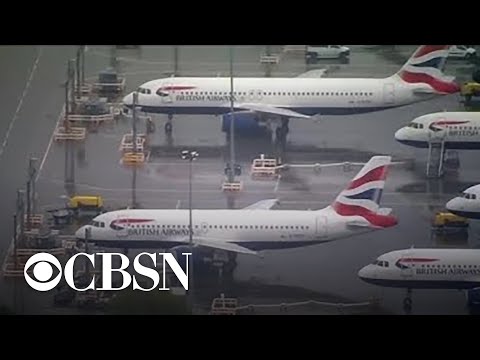 British Airways cancels nearly all flights over pilot strike British Airways cancels nearly all flights over pilot strikeA pilot strike has virtually shut down British Airways most flights for today and tomorrow from Heathrow Airport in London, British Airways planes are grounded like a ghost town. Pilots for the airline began a two-day strike Monday, forcing the carrier to cancel almost all flights about 195,000. Travelers are expected to be impacted, including marry her but J from Seattle. I have plans when you have everything all set and all the sudden it’s like having a feud is over money. British Airways says it offered the pilots of pay raise of 11 and a half percent over three years, but union leaders want profit sharing to the package. 100 % solid 93 % British Airways Pilots voted to go on strike 46 were cancelled too. Glade 18 ran on time, with most of them run jointly with American Airlines flight before today. Making sure that every passenger that wanted to travel today has had a solution. We believe the vast majority of them do have those Solutions already completed Tina Crouse, CBS News Monday, British Airways said Monday that it had been forced to cancel almost all flights as a result of a pilots’ 48-hour strike over pay. In a statement Monday, the airline said it had “no way of predicting how many (pilots) would come to work or which aircraft they are qualified to fly.” CBS News’ Tina Kraus reports.