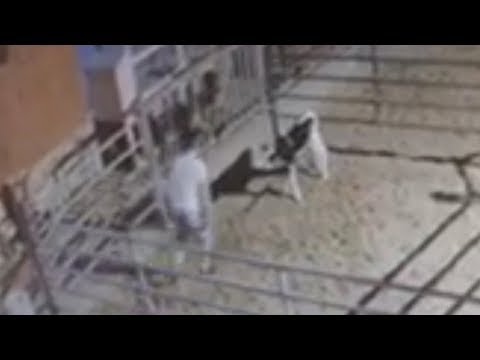 Calf shot, stabbed, then stolen on surveillance video Calf shot, stabbed, then stolen on surveillance videoIs the particular pain here where the cop was located Ben shoot the 5-day old animal with what he says appears to be a crossbow that understand what death is it’s it’s the wrong thing to see. Preformed at about 5 a.m. on August 1st, it captured what happened when the man approached the Kathleen scorcher shots that landed in the calf over a. Of about 8 minutes. So I took them time to actually doing the calf, the Catholic standing most of the time it didn’t lay down until the end when the when the perpetrator got into the pan with it and then proceeded to stab the calf. Abc News has chosen not to show portions of the video Anderson says: the suspects were well-dressed. He says a woman watched as the man attacked the newborn animal. He says they took the 100-pound cows and put its bloody body into a dark color. Bmw, the only witness was this milking cow with her calf who appeared agitated in the morning when Anderson and his wife arrived police say it’s unclear. If the suspects took the cast for its meat or whether there was an even more Sinister mode investigators say the public can help in the case going to come down to the video and potentially one more able to get the video out there. There will be someone who can identify the movement of the culprit or or perhaps we’ll be able to get extract. Quite a good FaceTime will be able to identify. The people is open to the public, but the attack he wants the suspects to be found and charged. If it is for food or for Ceremony reasons, or whatever reasons they have, I think if these people are caught, hopefully they they can be tried for animals Mira, Dean’s CBC News, Langley A dairy calf in Langley, B.C., was shot and stabbed with arrows by a trespasser and it was all caught on surveillance video. RCMP said investigators reviewed the surveillance video and hope the public can help identify the two trespassers.