Can paying for wildfire prevention stop the crisis? 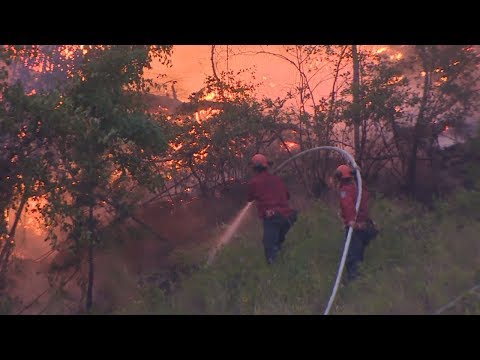 Can paying for wildfire prevention stop the crisis? Can paying for wildfire prevention stop the crisis?Every Wildfire season, Robert gray, makes the same argument. Fires are getting bigger to to climate change, so the fuel that feeds them needs to be cleared away from DC’s Forest. The problem is, there’s no money in it for forestry companies landing and truck into a facility. We don’t it has a cost. The cost is massive, so this time, instead of once again making a scientific argument to invest in the move in and remove as much biomass off those sites as possible, so it doesn’t become fuel for the next fire. The idea is to subsidize private companies tooth in BC’s Forest. If it becomes profitable to harvest wood, he gets left and slash Myles. The waste wood can be ground up and turned into wood products for construction competing with engineered wood products are cement. Steel vinyl. As far as building materials – and they have a big carbon footprint, but if we can basically, you know, answer the market and replace those things with engineered products where we can we’re solving two problems. Reducing the Fire cost of reducing emissions industry and those who say government should keep its nose out of a free-market economy BC. Liberal Forest critic, John rustad says subsidies aren’t the answer that creates all kinds of challenges: overtime. Grey knows there will be critics who say his proposal on socialism, but many and Forestry agree on this. There needs to be a generational shift and how would his harvesting is maturing and it’s coming to the point where they cannot no longer ignore the what they used to have as a waste of residual who should pay for it? That’S when the argument start Jesse Johnston, CBC News Vancouver British Columbia’s government should pay private companies to help solve B.C.’s wildfire crisis, says fire ecologist Bob Gray. He believes providing financial incentives to remove the biomass that jeopardizes B.C.’s forests is the best way to mitigate wildfires.