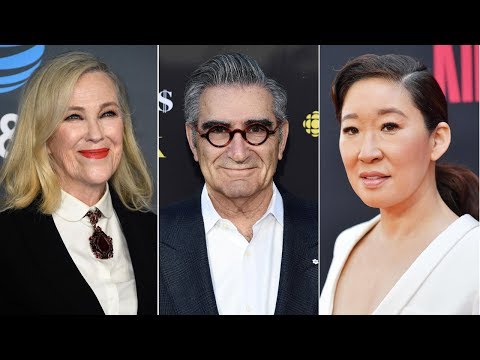 Canada’s Sandra Oh and Schitt’s Creek garner Emmy nods Canada’s Sandra Oh and Schitt’s Creek garner Emmy nodsCall the American television Academy announced its nominations for the 71st Emmy Awards that is happening in September, and while these are American award, there certainly are Canadian nods among the nominees of Brittany on the attic to talk about Summer. Good Conduct content Amazon. Well, there is definitely a lot for a Canadian to route for when these Awards happen, because the nominations are any of the word outstanding. What’S half of the categories, including outstanding actress in a drama series, want to talk a little bit about killing Eve, because this has definitely done very well in terms of dominations with at least three. We know that we stop for outstanding drama drama rather and two of the actors they’re up against each other in this for best actress Sandra, Oh and Jodie Comer, you get a look at this incredible I’ve Goosebumps, even watching this scene, because the two of them together, It’S pretty phenomenal. She is the serial killer to Sandra Oh’s type of detective role. This is incredible crew for killing Eve. Definitely schitt’s. Creek is another one from a Canadian standpoint for best comedy series, as well as outstanding, lead actor in a comedy for Eugene Levy. Sanding lead actress for Catherine O’Hara. They really are incredible individually, but also together, as this Rose couple, who’s come under hard times after being very, very well-to-do and then you’ve got outstanding contemporary costumes, which is it because people who work behind the scenes they don’t always get props in the same way that The actors do, but, for this particular show, the costumes are pretty important to the actual characters themselves, so good on them and good on the fact that they’ve been pushing when it comes to after the lgbtq characters. How queso that’s schitt’s, Creek and also wanted to talk about Samantha Bee host of a variety program should know that she is the only female on the because really she’s the only female in contention for the on the scene, but it really quick little side note is That next year we might see someone else on that, because we know Lilly Singh has now received a contract to be hosting her own variety show, so maybe Lily sings name be up there next to Canadians route for, but this is certainly a big year for for Samantha Bee as being up there for the top prizes going to all white actors and Sandra Oh nominated, as you say so, obviously not to to diversity, also a lot of other nominees. But what is it going to look like this time run? Will there be more variety if you will, when you scroll down the biggies on entrance, is Best Actress or even supporting it is predominantly still white. However, there are two very important standout to know when it comes to best male actor in that category, that it’s worth noting that blackish actor Anthony Anderson, Deptford, lead actor and then another show Black Monday. Don Cheadle is up for lead actor for that once so. Those are some standouts and also worthy of noting us, and that’s when it comes to limited series for acting jobs. When you think of the show the limited series when they see us this is from Ava Duvernay. It ended up getting quite a bit of attention here at the nominations, for acting Noms for Niecy Nash, as well as drill Jerome’s, and to this is all based on either the quintessence Central Park. Five in some cases now the exonerated 5-2. That is really about to fight for various man accused of a crime in their innocence. It’S an important story that a lot of people have been talking about in parallels with the news and then another one as well in terms of diversity hose because this is an American drama series. But it’s all about African-American and Latino tranh gay and him generally gender-nonconforming Ballroom culture. That’S the scene in Newark New York in the 1980s Odessa Slice of Life that we don’t get to see on the screen very often, and also quick notes to just talk about lead actress in a drama series for Viola Davis for how to get away with murder. So that’s really not comprehensive. Are the standouts when we’re talking about actors that can at least represent diversity in a much more robust way? Schitt’s Creek is among several Emmy Award nominees with Canadian cred. Along with best comedy series, the show earned nominations for actors Eugene Levy and Catherine O’Hara, as well as a nod for its costumes. Sandra Oh is a repeat Emmy nominee and will compete for best actress in a drama series for Killing Eve.