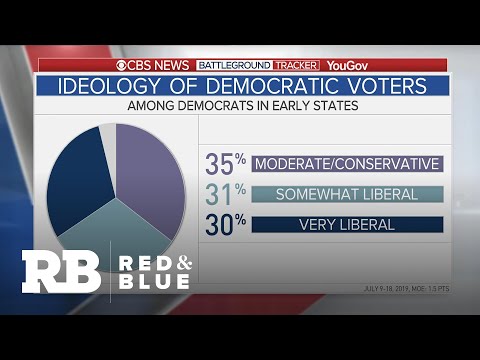 CBS News Battleground Tracker: How liberal are Democratic voters? CBS News Battleground Tracker: How liberal are Democratic voters?As part of the CBS News, 2020 Battleground tracker, we asked registered voters to describe their ideologies. Democratic voters are split into 3, roughly equally sized groups, 35 % of Democrats and ended been to lean Democratic, see themselves as moderate or conservative 31 % see themselves as somewhat liberal and another 30 % say they are very liberal. Give me Arcana is senior manager of Elections at CVS, news who wrote about these three groups of democrats for cbsnews.com computer. Thank you so much for being with us, as we think about this field of democratic candidates. Can you give us an over of how these different groups vary from one another Shore? Well, the first thing we saw on our data is that the very liberal group is the most tuned into the campaign at this point, I’m so when we ask voters how much attention they’re paying the 20 candidate, the very liberal group was the most likely to say That they’re paying a lot of attention right now and I’m if you can find the primaries online, you hear a lot of talk about Progressive ideas such as a green New Deal and Medicare for all yeah. It’S important to remember, though, that the more moderate groups actually make up a majority of the party, and they tend to have somewhat different priorities and candidate preferences than the very liberal Wing. Does issues do members of each of these groups actually care about the most? So there is a lot, they agree on number one. They strongly disapprove of the president and they really want a candidate who can beat them next year and in terms of specific issues. They are agreed that Healthcare has a top election issue and they want to hear the candidates talk about how they’re going to lower healthcare costs, but there are also some differences and priorities among the groups when it comes to things. I want to hear more from the candidates about very liberal cats, tend to prioritize climate change and protecting the environment as well as protecting immigrants and their families, abortion rights and issues of social justice. Moderate conservative Democrats, on the other hand, tend to prioritize more pocketbook issues, so job creation and taxes, so among the motor to conservative group, 7 and 10 rate jobs and wages as a very important election issue when it comes to the parties messaging next year in 2020, They’Re also interesting differences, so the very liberal group wants the party to advance and even more Progressive agenda than the country had under Barack Obama and the shows up in views of Medicare. Plural, for example, which three and four of the very liberal support. The modern conservative group, once I return to normalcy message, they basically want the party to say we’re going to take things back to how it was before President Trump took office and they’re much more skeptical Medicare for all. So what about qualities? What qualities do these different types of Voters actually want to see in a candidate or person of color are white, but some did Express a preference, and so among the very liberal Democrats are more likely to say that they prefer a female nominee to a male one And they prefer a kind of color to a white candidate. The moderate conservative group on the other was slightly more likely to say they want a man to a woman in 2028 candidates who actually stands out among each of these groups. Beth Warren is the Top Choice. Think she’s run on impeaching the president, a very Progressive platform and a Bernie Sanders is behind her. When we ask voters what’s the main reason, you’re considering War invece, her policy stances more moderate groups. Joe Biden is the favorite right now. This is, as of our latest estimates that came out last month. I’M so, among the somewhat liberal, is Joe Biden in first place, followed by Liz Warren and Kamala Harris and among the moderate to Joe Biden, is the clear favorite right now and when we ask people why they’re considering by then most people say his time as VP. Under President Obama, all right, when you look at these groups at through that demographic lens, what did you actually find out? There are definitely differences in terms of demographics. The very little liberal tends to be younger and are more likely to be white voters and actually, among them, conservative group, a slim majority – are non-white. Their voters of color relates to that support yourself, very well. Among black democrats, for example, another interesting difference that the very liberal group tends to be more affluent in terms of their family income and their education levels. So if you look at college attainment, for example, while be moderate, conservative groups are more likely to come from working-class families and to say that there learned about their monthly finances, really fascinating. I’M sure this is exactly the kind of information that campaigns are dissecting every bit of data. Thank you. So much Registered voters were asked to describe their ideologies, as part of the most recent CBS News 2020 Battleground Tracker. Kabir Khanna, the senior manager of elections at CBS News, joins CBSN’s “Red & Blue” to break down the numbers.