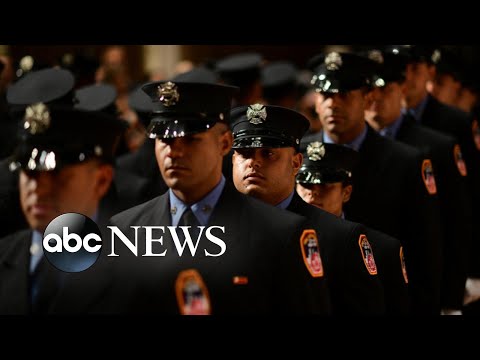 Children of 9/11 firefighter victims take oath to join FDNY Children of 9/11 firefighter victims take oath to join FDNYFunny tonight America, strong the children of 9/11 firefighters who waited years for this moment to make their fathers proud. They are the brave members of the FDNY Who We Are Forever grateful for losing their lives on 9/11, some of the dying long after from all of that work at Ground Zero tonight, 18 years later, their children now in uniform, taking their old today. So many sons and a daughter graduating from the FDNY fire academy, Matthew Gjovik here in the arms of his late Father, Anthony Matthew today, the crowd cheering let her go. Do junior Here is a boy with his father, Leonard senior graduating, alongside his younger brother, Anthony as well, two sons inspired by their father, a brother and sister Rebecca sorrow, graduating with her brother Mark, their father, Carlos Soro, up Italian 9 growing up his son, always thinking My dad has the coolest job in the world Gregory Campbell, Gregory Comfort was just ten. His father Kenneth died tonight, Gregory remembering his father’s kindness for strong and kind and compassionate and healed from cancer Ground Zero. His son Robert Jr tonight determined to carry on his father’s Legacy just making my dad proud today.. Thank you for see you tomorrow, goodnight ABC News, YouTube channel, more videos, show highlights and watch live event coverage click on the right over here to subscribe to our Channel and don’t forget the damn. Are the ABC News app for breaking news alerts thanks for watching Leonard Ragaglia Jr. graduated alongside his younger brother Anthony, who were just 7 and 10 when they lost their father.