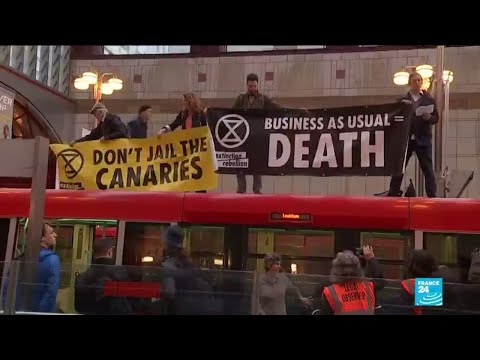 Climate protests continue in London, leading to disruption in financial district Climate protests continue in London, leading to disruption in financial districtExtinction, Rebellion group stage 2 demo at Canary Wharf Station on Thursday, disrupting public transport in a bid to call attention to that cools is all we have to do. This scientist scientist discount comes after weeks of one-off protests with demonstrations in central London, a door smashed at the headquarters of shell and the semi nude protest in Parliament. Just a few miles away at the London Stock Exchange a more formal looking Gathering, but the message was the same: we are headed to the highlights.. There are people and businesses trading in a logical disk in that building behind us, and we want the people in this building and around the world are in the financial industry to understand the impact that they’re having on our futures. Protest is away from the building. At least 1,000 people have been arrested since the movement started at the beginning of April. Many of them defiant in the face of what they cool criminal in action on the issue of climate change, lead responsibilities for the whole and other people going to send him. Do that Extinction 20 and is calling for its citizens assembly as a means to achieving that goal. Subscribe to France 24 now:
http://f24.my/youtubeEN

Climate activists have glued themselves on the London stock exchange, blocked roads near the Bank of England and climbed onto a roof of a train. The city’s rebellion group caused mass chaos in the city’s financial district to put a spotlight on climate justice.