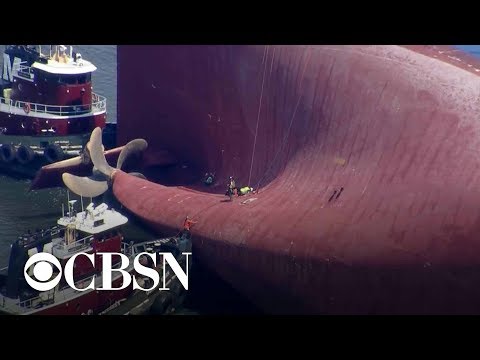 Coast Guard makes contact with missing crew members on overturned cargo ship off Georgia coast Coast Guard makes contact with missing crew members on overturned cargo ship off Georgia coastEveryone will come back, Emory green will join me in just a moment. Ship capsized with four people on board were rescued early Sunday snooze one more. Can you tell us missing crew members that have been missing since early Sunday morning? I just take a look behind because what they have to figure out how to get these crew members out of this vessel its massive, you can see that Tugboat right over there, that has stabilized The Vessel, will not L into the channel, and that is what is Really important right now to keep it stable to these Coast. Guard members can get into the hole to extract the crew members. We do know that all four of them are from South Korea. Earlier today we went over the sea Center and we talked to a woman who helped with the other crew members were rescued. On Sunday she said that they were in good spirits and she said many of them were Filipinos. Some others were South Korean as well, and there was a female crew member on board with highly unusual in this type of a situation. But again we’ve been watching this rescue process underway now we know the local affiliate from Jacksonville wjxt. This vessel is nearly two football fields in length that is huge. The water behind me blad is about 30 to 40 ft deep, so they expect that the vessel is resting on the seafloor. This operation is moving to faster than a lot of people expected. So we are just going to have to wait and see right now as to when the Coast Guard is able to extract these four crewmembers.. The ship is Masa. Paper calls to mind, brings to mind the old 1970s film Poseidon. Adventure looks very similar to a shot in the movie Coast. Guard and other Rescuers were able to make contact with the for individuals that are still inside the ship make sure that nobody was in the water. Then they started knocking on the ship and they could hear. Sounds and noises coming from the ship at first, they weren’t sure if it was cargo moving about or if it were. These four crewmembers keep in mind that 4200 vehicle we’re on board this vessel when it overturned, so they weren’t sure what they were hearing. Fantastic news, as we now know that the Coast Guard has made contact with him and as we’re just have to wait and see how they plan to remove them safely. Play knows about mixmag I’ll, hopefully we’ll even perhaps have some good news before the days. Then I will check back in with you a little later. Thank you. Meg The U.S. Coast Guard says they have made contact with four crew members missing from an overturned cargo ship off Georgia’s coast. The ship capsized with 24 people on board. Meg Oliver joined CBSN with the latest.