Conditions deteriorating quickly as storm bears down on Gulf 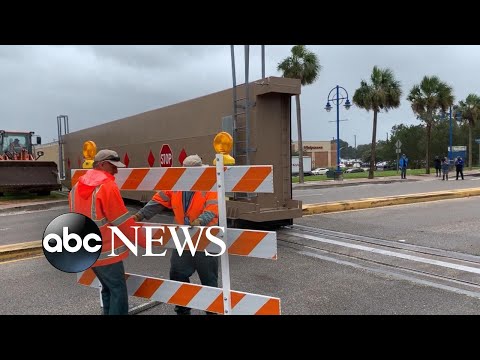 Conditions deteriorating quickly as storm bears down on Gulf Conditions deteriorating quickly as storm bears down on GulfWhat authorities are now calling a life-threatening storm about to hit the golf in just hours? Tropical Storm Barry is gaining strength right now. The outer bands hitting already tonight you can see the roads are covered in water driving conditions were sitting at this hour and look at the flood already. This could very well make landfall in Louisiana as a hurricane, the levees in New Orleans will be tested and just look at the size of this tonight. Emergency officials are warning not just about the storm itself. This is the highest. The Mississippi River has ever been with a storm of this eyes, set to hit President Trump tonight already declaring a state of emergency meteorologist Rob Marciano. Was there he pleases off tonight hurricane strength with winds over 60 miles per hour, already pushing water inland thousand scrambling to pack up and get out this gas station running out of fuel yeah, and that’s only two are up and running right now your shells emptying to Officials warning this is a life-threatening storm and the clock is ticking. Time is short. If you have preparations that you need to complete. Now is a Time tonight, Grand Isle Louisiana already under water before the storm. Even hits residents here ordered to evacuate, but not everyone getting out directly in the storm’s path. Already filling up sandbags near the coast of Louisiana and berries. Bullseye flower in New Orleans residents are being urged to shelter-in-place Taurus are pulling out of town, pretty much. Listen to that warning, so did you get out front in the French Quarter being boarded up and for the first time in history all the cities? Flood gates are closed. I, like the barricades and the governor is confident the upgraded levees will hold the Mississippi River back, at least in New Orleans. Our state is better prepared, but that comes with a caveat. You never know what Mother Nature is going until she has served. That is for sure, so, let’s get right to Rob tonight to at the new timing in the track of the storm set to make landfall overnight Rob Rising. The center of the store now only 50 miles off the coast line here is on the satellite picture and went against the heaviest weather is down to the shop with me will get the heavy weather even well past landfall, which expect to happen in the next 12 Hours lightly, as a hurricane getting into into Lafayette by around lunchtime and then dripping northward now the storm surge with this is going to be about 6 feet. The worst witch will be on the right or east side of that as well. The heaviest rainfall. So I’m worried about places like that Ruth was 50/2 feet of rain places in as well as a slow mover. So it’s going to be a weekend-long event across the southeast. David were thinking about everyone in the path of this and Rob. Thinking of you, too, you show, highlights and watch live event coverage click on the right over here to subscribe to our Channel and don’t forget to download the ABC News app for breaking news alerts, thanks for watching New Orleans floodgates were closed for the first time in history, as residents were being urged to shelter in place.