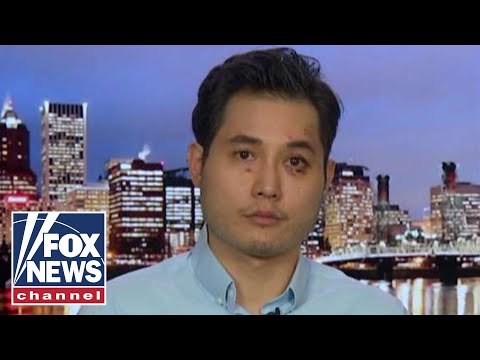 Conservative journalist attacked by Antifa protesters speaks out Conservative journalist attacked by Antifa protesters speaks outAndino’S independent journalist, the Pacific Northwest, put on the showing number of times he covers antifa quite a bit. He was an antifa rally over the weekend minding his own business, covering the news is a journey, but he was beaten almost to death by antifa went up in the hospital he just got out and joins us now on. This program are happy to school and I’m glad you’re capable of doing this interview tell us what happened documenting this protest that was organised by antifa and its allies be, were a literal stone’s throw away from Portland’s most important institutions of the rule of law. The courthouse is the Sheriff’s Office, the central police precinct, while hearing people Charmed no hate, no fear, I’m suddenly.. On the back of my head from behind and from there I’m a very positive person. I never been in a fight. It took me a few seconds to realize that I was actually even hitting my head when I realized what was happening and was too late a mob of people all dressed in black and wearing masks started beating me with their face, and some of them use objects To hit me, I don’t know how many people were involved, it seems like five 15 or 20. It could have been not many. They beat me so much and thought I lost control of my GoPro camera that I was holding, which was then stolen from me and when I thought it was over, I was wrong. I put my arms up to try to Shield my face as well as to signal to them that I was surrendering that I wasn’t there to fight without really signal to them to be more aggressive. So then they started dumping. What I believed were milkshakes and eggs, throwing it out my face, which blinded me so I couldn’t see – and I was kick some more punch some more all this time I kept thinking. Where are the police? I could still see the Winona County Justice Center in front of knee, but no police officer arrived eventually stumbled away bleeding across the park and I lost my balance. So I sat down on the ground in front of the courthouse. In from there, a medic SWAT team informs me that, in order to get an ambulance he taken to a hospital, I would have to walk to the police precinct, in other words, walk back in the direction of the demonstrators who just attacked me later. That night. After arriving in the emergency room, I had a CT scan which confirm that there that I was diagnosed with a brain hemorrhage. This is the group that CNN Primetime anchors have defended and promoted. Andrew Yang is running for president as a Democrat bless him attacked in t44. This have you received any other support very quickly from any other Democratic office holders in Port or nationally, not that I know of not that I know of what it tells you everything and you know where we’re happy that you’re at least capable of joining us tonight. That’S a shocking story and raging. We wish you the best on your recovery. Hope you come back. Thank you. Thank you. GOP lawmaker calls on Trump to designate Antifa as a terror organization; Quillette editor Andy Ngo shares his story on ‘Tucker Carlson Tonight.’ #Tucker #FoxNews