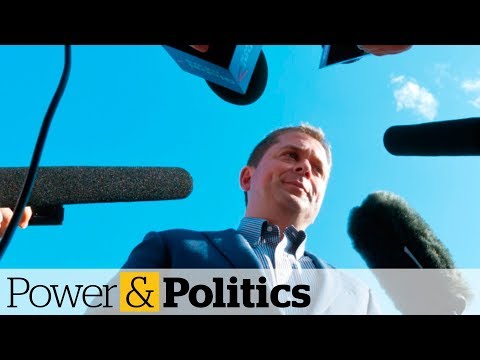 Conservatives offer media outlets cheaper access to Scheer’s campaign tour | Power & Politics Conservatives offer media outlets cheaper access to Scheer’s campaign tour | Power & PoliticsThe conservative party is offering me to organizations a dramatically reduced price to cover Andrew shears election campaign. This fault, the party plans on charging roughly the same amount for the entire election., As it did for just two weeks in the 2015 campaign. So, what’s behind the decision – and the thing is he’s Katie Simpson joins us with the details: hi Katie break down these numbers for us. What is everything for this is basically for airfare for bus fare for Wi-Fi for hotel room office space. The reason this number is getting a lot of attention right now is dramatically lower than what’s been charged in the past and it’s dramatically lower than what other parties are charging the NDP this year to compare to cover the same costs. It’S going to be $ 45,000 per day significantly longer the conservatives charge set Andrew Scheer. Why we have a great story to tell, and we want to make sure that we get that story in front of Canadians in as many possible ways as we possibly can name recognition to sitting. Prime minister, does they need to get him in front of his many media Outlets, as they can during the election campaign? To the Canadians get to know him by offering this lower price more media Outlets, particularly newspaper, are reporters might be able to join his campaign. This truck has the four rules of the pricing thing happened before in the past number of different political parties that have tried to do different things didn’t to attract more attention. That’S always the goal for the opposition parties, but there’s some concern being raised by former GP strategies, Kathleen mock charging, basically a fifth of the price. What other parties are charging concerning? I wonder how they come to those calculations and what exactly they’re trying to send. She is suggesting: okay, is this subsidized travel? We went to the conservatives, they say absolutely not. This is no way to most the most anyway to know whether political parties are overcharging or charging, and apparently there’s no way to tell there’s no way for elections, Canada to determine that, because the campaign reports they submit are not to that level of granular details. If you have to indicate how much money in total they spent on travel for the leader for the campaign, but it doesn’t indicate you know that level of detail. So they could pick it up thanks for watching The Conservative Party is offering media organizations a reduced price to cover Andrew Scheer’s campaign ahead of the upcoming federal election.
To read more: http://cbc.ca/1.5251994