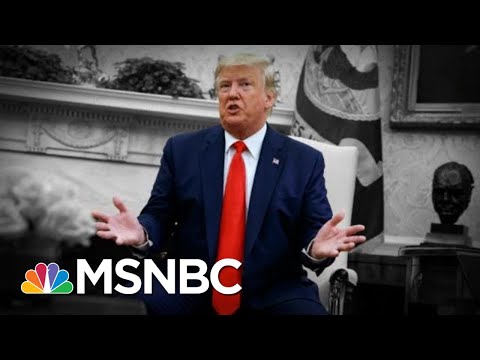 Day 965: Trump Marked The Anniversary Of 9/11 By Attacking His Rivals | The 11th Hour | MSNBC Day 965: Trump Marked The Anniversary Of 9/11 By Attacking His Rivals | The 11th Hour | MSNBCDay 965 of the Trump Administration September 11th, 2019 – that makes it the 18th anniversary of the largest loss of life on us soil. Since the Battle of Antietam in the Civil War and the the launched our longest war still ongoing tonight, the president started this anniversary of the 9/11 attacks with his own attacks on social media railing about a pole done quote by one of the worst posters of them All the Amazon, Washington, post-abc sleepy Joe Pocahontas, virtually all others, would beat me in a general election. I haven’t even started and I’m constantly fighting fake news. Russia, Russia, president, has I’ve been campaigning ever since his official campaign announcement rally back in mid-june in Orlando Florida on the president XI morning. He posted quote the Federal Reserve should are interest rates down to zero or less it’s. Only. The naive boneheads Trump did go to the Pentagon for the morning 9/11 Memorial remember the Pentagon, one of the targets. On that day he spoke of his decision to abruptly call off.. We had peace talks scheduled a few days ago. I called them off when I learned that they had killed a great American soldier from Puerto Rico and eleven other innocent people. They thought they would use this attack to show strength, but actually what they showed is unrelenting weakness differently reason they come back to our country. We will go wherever they I use power, the likes of which the United States has never used before Trump also had quite a bit to say about his former National Security advisor John Bolton On this day of such meaning behind the banner of anything National Security. Trump used in Oval Office event to announce plans to ban the sale of flavored e-cigarettes to defend the departure of John Bolton, so Jon I actually get along with very well. He made some big mistakes. Frankly, he wanted to do things not necessarily Tougher Than Me. John’s known as a tough guy, so tough he got us into a wreck. It wasn’t getting along people in the administration that I consider very important when asked for a response bolt and texted this to nbcnews I’ll have my say in due course. President Administration, including, but not limited to China, Iran, North Korea gun control, is responses seem to strike a similar note having to do with vagueness. Not so much specifics. Look at so many of the things that are happening. We are looking at vaping very strongly and we are always watching Venezuelan we’re going to take a look at a lot of different things, but I’m not looking at anything there. A lot of things under discussion have a great diet, but I look at some statements that are made from so many different people and I do believe they like to make a deal if they do that’s great and if they don’t that’s great to very much. So very meaningful things can happen, we’ll see what happens every, maybe they do and maybe they don’t see so we’ll see what happens we’ll see what happens to see what happened to the president concerning hurricane Dorian roared back into the headlines today, New York Times Reporter, with A byline that includes Peter Baker join us in a moment says Trump pastors who contradicted Trump’s claim the Dorian could hit Alabama Washington Post, also reports Trump push staff to intervene with the Nations main for casting agency again, a division of the Department of Commerce and the Today was asked about that. Did you tell your Chief of Staff to have Noah disavow those forecasters who said that Alabama was not in there fake news media when they talk about the hurricane and then when they talk about Florida they talk about Alabama. That’S just fake news: it was right from the beginning was a fake story. Thousands of people tonight or still believe, has parts of which Dorian left uninhabitable. Today, NBC News learn. The Trump White House has decided not to Bahama residents who survived the storm. It means they can come to the u.s. early only if they have the right travel documents, but they won’t be granted. Work permits once they’re here, 1,500 victims of Dory and have so far come to our country. Many others remember have lost their passports along with all of the rest of their shelter and belongings. There was also, what’s being called, a major win for Trump today on immigration: the Supreme Court, allowing his administration to refuse to consider a request for Asylum who fails to apply for it in another country after leaving home. But before coming here to the United States, a lots of other great videos – Between events in the Oval Office and remembering 9/11, Trump spent his time on Twitter airing his grievances.
» Subscribe to MSNBC: http://on.msnbc.com/SubscribeTomsnbc