Dead bodies stored in trailer leads to probe in Alberta 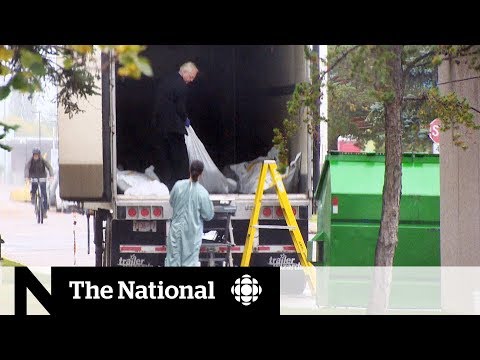 Dead bodies stored in trailer leads to probe in Alberta Dead bodies stored in trailer leads to probe in Alberta17 body, shaved and white bags lined the floor of a refrigerated semi trailer park near a busy Edmonton Street Hazard camera rolls a funeral home employee drags one of the bodies along the floor, then tugs it to him Journey. That is terrible. This professor studies, death and dying this treatment of bodies he says is in sharp contrast to what he witnessed over the years as he took students on tours of the medical examiner’s office. This is unconscionable cuz. I say it. It suggests that the offices is underfunded and understaffed, because there is a long history of the culture of Care’s, I’ve emphasized and and there’s no reason for that to be compromised renting the trailer because it ran out of space internal email. Show staff raised concerns with the chief medical examiner, dr. Elizabeth Brooke slim last week and employee told her. I feel that this might not be something. That’S please we’ll find acceptable. How do I approach this when speaking to families she responded the floors clean. The bodies will be in body bags and the families do not need to be informed of the storage procedures late today, Alberta Justice said. First foremost, we extend our apologies to all family to entrust their loved ones to us. A contingency plan was implemented to manage an unusually high number of new death cases. The department said steps are being taken to ensure dignity, respect, but the opposition NDP said more needs to be done. Who authorizes decision? Why did they not listen to the concerns that were raised by staff in the office to identify that this would be something that would be considered a real life? The other people involved in the system Shepherd also called in the government of Premier Jason Kenney to if necessary, increase funding to ensure the dead now or never again treated this way. Charles Russ nail CBC News, Edmonton Alberta’s justice department launched an investigation on Wednesday after CBC News exposed how bodies of the deceased were being handled in Edmonton.