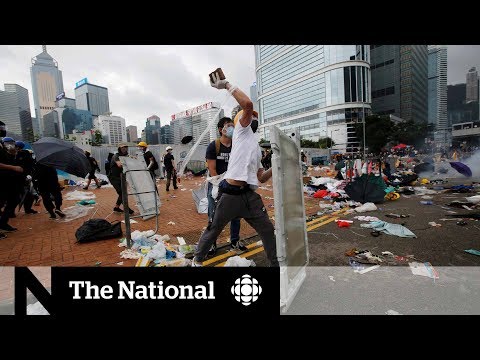 Defiant protesters in Hong Kong aren’t backing down Defiant protesters in Hong Kong aren’t backing downThousands came out to show their opposition to an unpopular law. They could see Hong Kong residents extradited to Mainland China to face its harsh and arbitrary legal system protesters say Hong Kong citizens. Freedom may be restricted and turn this tastes like magnet chili with very few freedom. Well, occupational, more of people going to space and we need the government to withdraw the Lord totally surrounded the legislature, forcing debate on the extradition law to be suspended and, of course, protested in the rain, bringing back memories of the popular Umbrella Revolution. Here in Hong Kong. Five years ago, but this one is different. First of all, it’s brought out many more people onto the street and people from different walks of life. Princeton some unionized bus drivers blocked the road by parking their double-deckers across it, but the police are also adopting more aggressive tactics moving in faster and for the first time firing rubber bullets bean bag rounds methods. Amnesty International has criticized as excessive force leader chief executive Carrie Lam has been unyielding, she’s been demonized for being too close to Beijing, but in a teary interview today she rejected accusations. She’S betrayed hongkong. I was born and raised here. She said this place is called for a lot of personal sacrifice. As for the extradition law, Lam is still valuing. It will be passed by Hong Kong’s legislature soon those protesters remaining on the street overnight, not moving until she changes her mind. Sasa petricic CBC News, Hong Kong They faced rubber bullets, tear gas and police batons, but defiant protesters in Hong Kong aren’t backing down. They’re determined to block proposed legislation allowing extraditions to China, with a goal to keep China’s growing reach at bay.