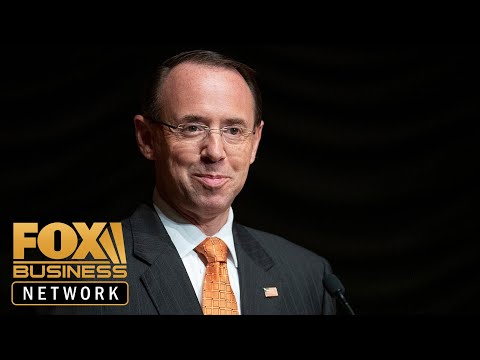 Deputy AG Rod Rosenstein submits resignation to Trump Deputy AG Rod Rosenstein submits resignation to TrumpEnd the current Deputy attorney general Rod Rosenstein submitting his resignation today, which will be effective, May 11th Rosen Stein, ending a turbulent two-year term wrote to President Trump saying quote. I am grateful to you for the opportunity to serve for the courtesy and humor you often display in our personal conversations and for the goals you said in your inaugural address: patriotism, Unity, safety, education and prosperity. Watch president Tom fitton Tom good to see you, you know it went both ways this. This wonderful effusive language attorney general gave him a big hug, but you think of everything you did with the you wonder whether he deserved it all, and I didn’t see anything in the letter about a discussions about using the 25th Amendment to illicitly remove him or trying To wear wire in the Oval Office, the discussions there to try to entrap him and then, as you know, as we discussed appointing in the same breath that special counsel to harass him for two years and allowing all those abuses to take place. Targeting Trump and people around him at the same time protecting the Clinton Obama, people who are buying the Alyssa targeting began in 2016 and certainly protecting Hillary Clinton Silence from doj on her emails. To spite please or someone to do something in light of the Sham investigation that was proven by the Sham investigation of Mueller and and and this General Lynch didn’t, he sign off on those fisa warrant switch which used such extraordinary information, such as came from the Trump Dossier stuff that was totally on verifiable. That was that now has been proven by the Mueller report itself, not true, but that was used and he signed off on it being used for those files. Are those find warrants? That’S right. He signed off on the final warrant. Application that we know about the renewal in the middle of 2017 after Mueller was appointed, so obviously that was benefiting mahler’s operation as well thanks, Sally Yates, who you talked about signed off on one of them when she was Deputy attorney-general, remember, Sally Yates was the rod Rosenstein of the Obama justice department – so you know, Ensign, was never questioned on any of this in any substantial way. He resisted oversight from Congress. He thought, like many justice department, deep Staters, that the justice department wasn’t answerable to much anyone the Congress, certainly not the president, and certainly not the American people. The doj Stonewall fell down around the doj even worse than under Obama, when Rod Rosenstein came to town, hopefully like a laser beam on some of those problems that you just outlined, you’ve got you’ve got the the John Huber report. That’S coming in. I guess that’s going to focus on Pfizer which were just talking about you got the Inspector General mr. Horowitz is coming out with his report. You have the Attorney General with his own investigation, so of course, rosenstock was around for mall or he won’t be around for these. Do you think he might be implicated in any of these? I do want to know about this effort. Attorney general Barr needs to focus on the role of mr. Rosenstein in the approval of Mister Mueller special counsel operation, despite not only Rosenstein’s conflicts but Mueller conflicts of interest, and then he was talking about with Andrew McCabe, who was fired for misconduct wearing wire on the President of the United States in an oval office now there’s a dispute as to whether he was quote joking or not. But again, why isn’t Congress question mr.? I just hope it is a new day at the justice department that the veil will be lifted, and these documents, as the president seemingly is Promised, will begin to be released in Declassified, certainly on these fisa warrant applications, portions of which are still class. How many believe that the portions that are still hidden, I show more deep State corruption targeting and abusing President Trump time very quickly. The request so far to have him appear in front Jerry, Nadler committee: do you think you’ll be a no-show? I think he will show up, because the Democrats will back down from having their lawyers question him. It’S pretty clear, they’re afraid of him. Otherwise they wouldn’t have to rely on Council to ask general attorney general Barr blue the Mueller report out of the water. In terms of its, I think what it was designed to do, which was to smear Trump. He saw right through that and said no, no collusion. Oh, you want to play games on apps I’ll, tell you the story on obstruction, the facts and the evidence in a log. Don’T justify any obstruction charges here and then, of course, he blew that he blew the lid off of the Spygate Scandal by acknowledging spine to replace targeting President Trump’s campaign. No wonder the Democrats don’t want a question directly on the one of his lawyers that I’m not afraid of lawyers. Questioning Witnesses is a some seem to suggest a, but it’s it’s it’s. I think it very interesting that, after years of wrestling, why they let the members question the witnesses. Why don’t they just have confident lawyers? Do it. The Democrats decide to do it for the first time with attorney general Barr Kratts in and Washington politicians, like nobody else Tom great, to see you. Thank you very much for being appreciated. Judicial Watch President Tom Fitton discusses Deputy Attorney General Rod Rosenstein’s resignation and how Democrats are pushing for Attorney General William Barr to testify before Congress.