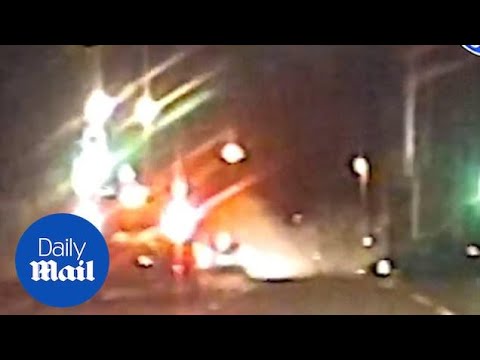 Driver crashes car after starting illegal race in front of police Driver crashes car after starting illegal race in front of policeOhmygod ohmygod Yankees 6-5 priority message: will Broad Street in the city centre for the vehicle. come six Juliet Juliet Lima and well 70230 lccc Willamette Tom bonesaw Plaza vehicles that rolled Jamil Khan (inset), 35, ploughed headfirst into another vehicle before flipping his luxury motor onto its roof after police spotted him racing through Birmingham city centre at just before 11pm on Monday, July 23 last year (pictured, police dashcam footage). Just three minutes before the collision, he had started an illegal street race with a BMW driver at some traffic lights – racing off at speeds of 75mph. Little did he know however, an unmarked police car was right behind him as the pair sped off through the busy city streets. Officers caught up with Khan near the city centre, an area packed with bars and restaurants, but he sped away from officers when they tried to speak to him. He was jailed for 26 months and banned from driving for four years at Birmingham Crown Court on Tuesday, August 13.