Europe behind the scenes: An inside look at the role of EU parliament interpreters 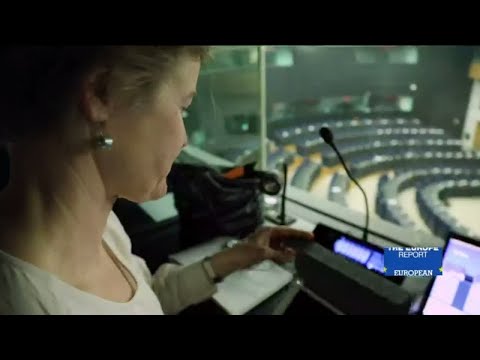 Europe behind the scenes: An inside look at the role of EU parliament interpreters Europe behind the scenes: An inside look at the role of EU parliament interpretersTo get to her office Mary lease has to maneuver through this Maze of corridors we are at the European Parliament in Strasbourg, and this is stoning interpreter is getting ready for an out-of-the-ordinary meeting United espasol Greta thunberg is going to address members of parliament, meaning the interpreters. Will be translating a unique message or call for Action from a very young climate activists entire world in preparation for this unusual debate, hear every detail counts interviews, even her parents names. This is information that could feature in Her speech. We don’t know how this discussion is going to go, tensions could ride. Maybe they won’t something. I mean I’m 16 years old. This marks the start of an intense hour of concentration for the interpreters, who translate into the 24 official languages of the European Union. Animations cheats, emotions and we do our best to replicate them in our language. Has it really takes a toll on us? It’S a never-ending job that requires 250 full-time staff and 2000 Freelancers in the past. Depressed what’s for native speakers, since that use, expansion in 2004 habits have had to change multiple languages meetings, so we’re play on colleagues like Miley’s, who can translate into a language that is not their mother tongue into French and the other boots, then Translate. and to their Own languages, their cooperation is at the heart of how the European Parliament functions. Subscribe to France 24 now:
http://f24.my/youtubeEN

Among the thousands of EU-related workers in Brussels are more than two thousand interpreters who work at the European Parliament. Alix le Bourdon and Tatiana Nassar report.