Fact Check: The Trump Administration Is Failing The Coal Industry | The Beat With Ari Melber | MSNBC 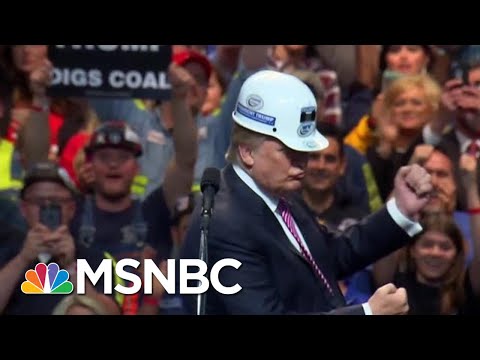 Fact Check: The Trump Administration Is Failing The Coal Industry | The Beat With Ari Melber | MSNBC Fact Check: The Trump Administration Is Failing The Coal Industry | The Beat With Ari Melber | MSNBCWe’Ve been reporting on a whole tear that Donald Trump has been on breaking campaign, promises left and right it in public and it’s important to keep track and hold these things accountable. Sometimes Administration backed off when exposed to consider tonight that not only is Donald Trump now forcing American taxpayers to fund the border wall, not Mexico, but he is also getting Exposed on something and he ran on explicitly in 2016, the coal industry and look at the facts. Since Donald Trump took office, 51 coal plants and now shut down, it’s actually more than the entire four years of Obama’s. First term equal companies have had to file for bankruptcy, and now, after Donald Trump claim, his priority would be bring back. Will you can hear from the very own head of the coal mine Union about how it’s going by nobody save the coal industry? Now that’s a harsh fact and it’s a harsh reality and here’s some more reality summer. Coal miners action came to Washington and they asked for explicit help to show up at their pension, something that is important to every Cole Family. They are, of course in trouble, as the industry is hemorrhage and apparently, according to these reports, President Trump Ponce, basically silence NBC news – shows a report that he’s not really dealing with this in any public way at all. Now that it’s not a campaign slogan, this is a long ways from his earlier promise. My administrator is putting an end to the war on call. We are putting the coal miners back to work, just like I promised call is coming back because you’re going to be working here, we are back. The coal industry is back. It turns out that actually restoring cooljobs is harder than pretending to do them. Just ask the actual Coal Miner’s President Trump has claimed to save the coal industry, despite 51 coal plants shutting down since he took office. Coal miners are slamming Trump saying ‘coal is not back,’ adding ‘nobody saved the coal industry.’
» Subscribe to MSNBC: http://on.msnbc.com/SubscribeTomsnbc

Fact Check: The Trump Administration Is Failing The Coal Industry | The Beat With Ari Melber | MSNBC