Felicity Huffman gets 14 days in prison for college cheating scam 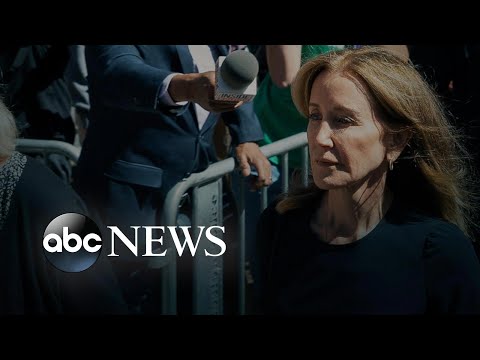 Felicity Huffman gets 14 days in prison for college cheating scam Felicity Huffman gets 14 days in prison for college cheating scamBreaking news late today, actress Felicity Huffman, sentenced to 14 days in prison for the college, cheating scandal, the full were Desperate Housewives. Actress have pleaded guilty after paying a proctor to correct her daughter, Sophia’s SAT score in court today. She offered at full apology for her wrongdoing and her betrayal, especially to our daughter up and had asked for probation, but the judge sentenced to prison time and explained why ABC’s Eva Pilgrim leave this off outside that Boston courtroom. Tonight, with your husband out of the Boston Courthouse just moments after being sentenced to 14 days in prison for her role. In that massive College admissions scandal, a message must be set for the next Felicity Huffman. The judge made it clear that she wants to send a message just because you got money and you got privilege, it doesn’t mean that you can get away with nothing like this Huffman $ 15,000, and I take full responsibility for my actions. Then tearfully addressing her. I can only say I am so sorry Sophia. I was frightened. I was stupid and I was so wrong. I have inflicted more damage than I could ever imagine just before sentencing the judge saying trying to be a good mother. Doesn’T The Desperate Housewives star will serve a year of probation, do 250 hours of community service and pay more than a dozen other parents now say sentencing after pleading guilty? Another 19 are fighting the charges, including actress Lori Laughlin, and her husband accused of paying half of million dollars to get their two daughters into USC, pleading not guilty to conspiracy charges. They could face up to 40 years behind bars if they both get convicted. She will likely be serving much more time than Felicity Huffman got today in making her decision today, the judge async Huffman took steps to get one more advantage in the system already so just started by money and privilege until it’s bringing Eva Pilgrim reporting in from Boston Tonight, either, when does Felicity Huffman start serving this 14-day sentence, so we know there are King is on both sides of this. There are critics out there who believe 14 days simply that wasn’t enough prison that will be decided soon, just making it very clear today that she wants husband to do that community service working directly with families telling her after she paid her dues, then she can rebuild Her life David, are you a pilgrim, leaving us off on a Friday night? Thank you. Everyone, George Stephanopoulos, ABC News. Youtube channel you’d like to get more video, show, highlights and watch live event. Click on the right over here to subscribe to our Channel and don’t forget, download the ABC News at 4. Breaking news alerts thanks for watching The actress will serve a year of probation, do 250 hours of community service and pay a $30,000 fine after admitting to paying $15,000 to rig her daughter’s SAT scores.