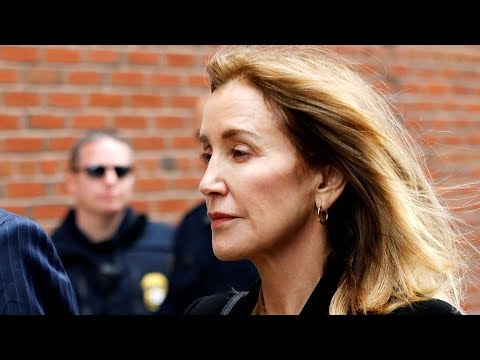 Felicity Huffman sentenced to 14 days in prison in U.S. college scandal Felicity Huffman sentenced to 14 days in prison in U.S. college scandalA judge in Boston has sentenced an actor named Felicity Huffman after she pleaded guilty back in May. To pain. To have her daughter’s SAT scores rig CBC, so they cannot do is live in Los Angeles with more on the story. So what is the sentence so far? Felicity Huffman has been sentenced to 14 days in jail in that Boston court room. She was told also she was given a $ 30,000 fine. She was sentenced to 250 hours of community service and a year of supervised release in May. She pleaded guilty to one count of conspiracy and fraud. She admitted to paying someone to get a proctor to change her daughter’s answers on the SAT. She is the first parent to BC in what has become the largest college admissions scandal in US history. There are still dozens of other people – coaches, parents, administrators who are watching this closely to see what they might be facing they’re already facing the same or similar charges in the Scandal. You have you no 15 parents who have pleaded guilty already 19, who are fighting the charges, like her fellow actress, Lori Loughlin and her husband, who are among them, so this jail time was a little bit less than what prosecutors had asked for it. They had asked for one month in jail, but it seems like maybe the judge kind of split the difference, because the defense had asked for no jail. Time was also the one that asked for the community service and they both agreed that a fine should be given. So it looks like the judge tried to take some parts of both of the lawyers suggestions in giving the sense prosecutors say what they really wanted in giving jail time to Hoffman was to be a deterrent for other parent for wealthy parents in particular, who might be Considering doing similar Brides In the Future for their children, and so that is why I jail time. Is you know in a lot of ways symbolic? Not just because of that, but also because many cases have been brought to light since Hoffman’s case first began about women in the US have faced much harsher sentences for doing much less. For example, I’m a woman named Tanya McDowell, who was sentenced to five years in prison for giving a different address than where she lives. She was homeless in order to get child into a better school and a better school district in kindergarten. And that is one of many similar cases. In that case she was black. She was as socioeconomically disadvantaged and it brought too late a lot of concerns not go to Broken American Criminal Justice System, but about how the wealthy and people who enjoy your privileged status might not necessarily get as harsh penalties for similar crimes. And so this why? This is why the jail time regard how long it was with so significant in this case Natasha in Los Angeles. Thank you. Sulekha Actress Felicity Huffman, the first parent sentenced in a wide-ranging U.S. college admissions cheating scandal, was given a 14-day prison term on Friday after pleading guilty to paying to rig her daughter’s entrance exam. She was also given a $30,000 US fine, 250 hours of community service and a year of supervised release.
To read more: http://cbc.ca/1.5282829