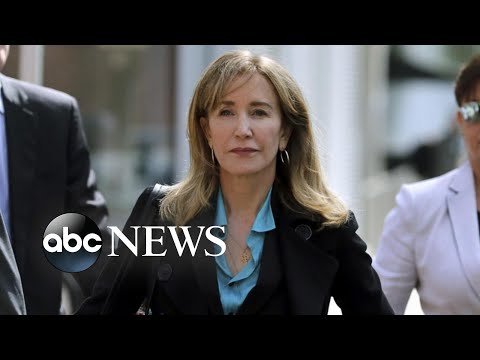 Felicity Huffman sentenced to 14 days in prison in ‘Varsity Blues’ case Felicity Huffman sentenced to 14 days in prison in ‘Varsity Blues’ caseFelicity Huffman clutching her husband, William H, Macy’s, had wild Boston today to hear her faith. The first of many parents to be sentenced in operation, Varsity Blues the punishment for being part of one of the largest college admissions Camp 14 days in jail 250 hours of community service and a $ 30,000.05 for one count of conspiracy to commit mail fraud. It was almost 6 months to day after the FBI arrested the Hollywood actress husband plead guilty in May. She wants to send a message that, just because you got money and you got privilege, it doesn’t mean that you can get away with something like this full responsibility. For her actions, it’s prison address to 10 days in jail Behind Bars, Felicity Huffman, describing her actions as deliberate and manifestly criminal, saying neither probation nor home confinement in a large home in the Hollywood Hills with an infinity pool would deter others from committing similar crimes. Ask for a month defense ask for probation the judge, split right in the middle and gave her 14 days was giving my daughter a fair shot. She called motherhood bewildering would couple with her daughter’s learning disabilities made her do what was the opposite of fair? She apologized profusely for everything, full responsibility and she had a bunch of character Witnesses, including Eva Longoria and her husband, nearly a dozen other parents, 25 million dollars to cheat the emission system, the most elite colleges from Stanford to Yale to Georgetown the cheat the system, the Head women’s soccer coach at Yale in exchange for $ 400,000 accepted an applicant as recruit for the Yale Women’s team, despite knowing that the applicant did not even play competitive soccer mad William Rick Stinger was The Mastermind hi. My name is Rick Singer and I’m the founder of the key as a father myself. I understand the stress. The college admissions process can put on your family and that’s the gator say the key, the fake College. This enabled the parents to not only mask the true nature of the payment, but also take the tax write-off at the end of the year, but just months ago the 58 year-old was focused on building his clientele. This is a game, just realize it. This is a game. Reality show singer plead guilty in March to a host of charges and faces 10 to 20 years in prison. He also turned against his clients, including Hoffman and Lori Loughlin of Full House. Babe may have embellished lied on our application Lockwood and her husband fashion designer Mossimo giannulli are accused of paying Seger half-a-million dollars in bribes to get their two daughters, Isabella and Olivia into the University of Southern cornea. Do you guys have any singer pitch the daughters as recruits for the school’s crew team, despite the fact that neither Road nineteen-year-old Olivia is a social media, influencer known as Olivia nearly two million subscribers on her YouTube channel and Amazon? But after news of the cheating scandal broke all three terminated, their relationships with her Olivia and Isabella have sent left USC, Lori, Loughlin and her husband have pleaded not guilty to mail fraud, money laundering and conspiracy, Huffman send it now Rocklands case she and her husband returned To court next month and she’s convicted, she will likely serve much more time than Felicity Huffman got because Felicity Huffman played accepted responsibility for what you did and has until October 25th, to turn yourself into a facility to serve her 14 days for Nightline. I’M Eva Pilgrim. In Boston, Massachusetts, hi, everyone, George Stephanopoulos here, thanks for checking out the ABC News, YouTube channel, you’d like to get more videos, show highlights and watch live event coverage click on the right over here to subscribe to our Channel and don’t forget to download the ABC News. App for breaking news alerts, thanks for watching The Oscar-nominated actress will serve time behind bars after pleading guilty to conspiring to commit mail fraud and admitting she paid the scheme’s organizer to falsify her daughter’s SAT score.