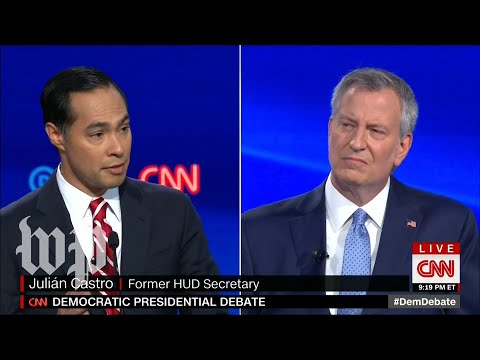 ‘Fire Pantaleo!’: Candidates respond to debate protests over Eric Garner’s death ‘Fire Pantaleo!’: Candidates respond to debate protests over Eric Garner’s deathTo make this a fair country and to make sure it’s a country that puts working people first language, this was a great example, the other day of the Department of Justice not going after officer pantaleo that used NYPD. He did that for seven seconds 11 different times. Eric Garner said that he couldn’t breathe, he knew what he was doing, that he was killing Eric Garner and yet he has not been brought to justice. That police officer should be off the street. I know the Garner family they’ve gone through extraordinary pain, they’re waiting for justice and they’re, going to get Justice there’s finally going to be Justice. I have confidence in that in the next 30 days in New York. You know why, because for the first time we are not waiting on the justice department told the city of New York that we could not proceed, because the justice department was pursuing their prosecution and years went by and a lot of pain approved and the meantime. What I’m working on making sure and I have for 5 years – there will never be another tragedy. They’Ll never be another Eric Garner, because we’re changing fundamentally how we believe in him. You heard earlier Mayor de Blasio respond to secretary cancer on the question of why the police officer who killed Eric Garner is still on the NYPD. Was that respond to adequate? Please respond as I was. If I was there I’d fire him, but as president, I would make sure that we had a full investigation at the report will be made public. And if I wasn’t satisfied, we would have a consent. Decree reviews about mayor De Blasio’s, lack of leadership for his failure to fire Daniel pantaleo, the killer of Eric Garner the man who died, who is choked to death in front of the whole world in the city of New York by remaining on the Police Force 5. Allowing police officers killed without without any recourse or accountability, black men and that’s not going to happen. Julián Castro, Bill de Blasio and Kirsten Gillibrand responded at the Democratic presidential debate on July 31 after protesters called to fire Daniel Pantaleo, the New York City police officer involved in the death of Eric Garner, an African American man, in 2014. Subscribe to The Washington Post on YouTube: https://wapo.st/2QOdcqK