First look at findings in Mueller’s report on Trump 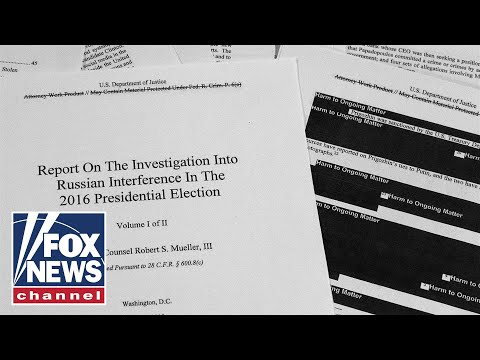 First look at findings in Mueller’s report on Trump First look at findings in Mueller’s report on TrumpHave the special counsel report here is split into two volumes? The first volume is devoted to Russia collusion it’s just shy of 200 pages, and the second volume looks at the issue of obstruction. I’Ve been able to pee through it is so lightly redacted and where there are redactions there’s actually a statement justifying the redactions weather is grand jury, material or ongoing investigation. So for folks at home it’s very simplified. It will be easy to follow with me, because I’ve got four areas that I want to highlight and read from the reports. The first goes to the issue of why special counsel, Robert Mueller, could not reach a decision on the obstruction question, and it reads quote because we determined not to me traditional prosecutorial judgment. We did not draw Ultimate conclusions about the president’s conduct. The evidence we obtained about the president’s actions and intent for the difficult issues that would need to be resolved if we were making a traditional prosecutor Judgment. At the same time, he writes if we had confidence after a thorough investigation of the fact that the president clearly did not commit obstruction of justice. We would State self based on the facts and the applicable legal standards we are unable to reach that judge accordingly. Well, this report does not conclude that the president committed a crime. It also does not exonerate him and that phrase will be familiar to people who’ve been following this issue because Attorney General, William Barr, quoted specifically from the section when sent the bottom line. Findings to Congress at the end of last month. I want to get to another section here, because it goes to the issue of why there was a written question answer session with the president and the special counsel decided at the end of the day to subpoena the president and force an interview in that section leads. We also sought a voluntary interview with the president. After more than a year of discussion, the present declined to be interviewed, then the following section is heavily redacted and it’s grand jury information. Ultimately, while we believed that we had the authority and legal justification to issue a grand jury subpoena to obtain the president testimony, we chose not to do so. We made that decision. If you of the substantial such an investigative step would likely produce at a late stage. In our investigation, we also says that, based on the significant body of evidence, we had already obtained of the president’s actions and his public and private statement describing or those actions. We had sufficient evidence to understand relevant events and to make certain assessment without the president’s testimony. So the bottom line there is at the special counsel is saying they had a lot of information from other individuals records that will provide by the way how they did not feel that they needed to take that step and subpoena the president. They would be satisfied with adequate to use on the written question-and-answer sessions. Now. This is a very important part of this, and it goes for the moment. I don’t think we’ve had these details before when President Trump learned, that is special Counsel, had been appointment. Those eight days in May between the firing of Comey and the appointment of special counsel, where a lot of very important events go down and its states and is according to notes written by hunt. This is a member of the team win sessions, as attorney Animal Jam sessions told the president, that is, special Counsel had been appointed. The presents them back in his chair and said quote: Oh my God. This is terrible. This is the end of my presidency. I’M EFT president became angry and lambasted the attorney general for his decision to recuse from the investigation stating. How could you let this happen? Jeff the presents that the position of Attorney General with his most important appointment and the sessions quote, let him down contrasting him to Eric Holder and Robert Kennedy sessions recorded the president said to him quote: you were supposed to protect me or words to that effect and That goes to something that we heard earlier today from Attorney General, William Barr, that there was a lot of anger and frustration on behalf of the president. He characterized it as very genuine because he was not guilty of these allegations of collusion and I just want to go back to page 75. Then I’ll. Can you redeem with more headlines because it goes to this issue of intent. The president later asked Rosenstein, that’s Deputy attorney-general Rod Rosenstein, who would ultimate oversee the Russia probe once Jeff session was refused to include Russia in his memorandum and to say that Comey had told the president that he was not under investigation and the prisons. Final termination letter included a sentence, the president’s insistence and against mcgahn advice. That’S White House counsel, Don mcgahn, stating the Comey had told the president on three separate occasions that he was not under investigation. So on the intent question, the president wanted a clear that he was not guilty of these allegations of collusion and that this had been shared with him with the then FBI director, James Comey. So I’m going to just take a break here, continue reading and flagging headlines as we get them. The Justice Department posts online a redacted version of special counsel Robert Mueller’s report on Russian interference in the 2016 presidential election online; chief intelligence correspondent Catherine Herridge reports. #AmericasNewsroom #FoxNews