Former U.N. climate negotiator: “We are definitely moving in the right direction” 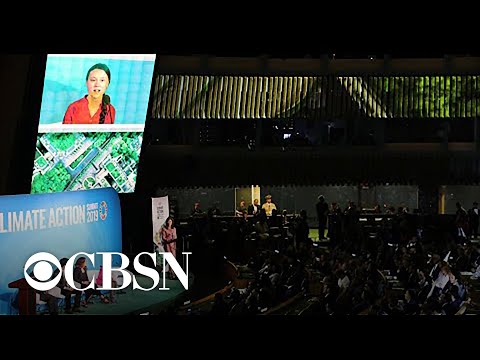 Former U.N. climate negotiator: “We are definitely moving in the right direction” Former U.N. climate negotiator: “We are definitely moving in the right direction”Climate change protesters block traffic in Washington DC this morning and an effort to shut down the city. The rally was planned by the listen to shutdown DC as part of the global climate strikes that have been going on since Friday. So far, at least 26 people have been arrested. It all comes as the United Nations hosted Landmark climate action Summit today and 60 world leaders have gathered in New York City to address the climate crisis president with an important message, and we fool ourselves. If we think we can full nature because nature always strikes back and the round-the-world nature is striking back with Fury joins me now she led the original negotiations of the Paris agreement when she served as executive secretary of the UN framework convention on climate change, Global optimism, Christiana, thank you so much for being with us. The u.s. is expected to formally pull out of the Paris agreement in November of next year, but doesn’t that depend on whether or not Donald Trump is re-elected? If there’s a democrat in the white house, we will likely stay in the Paris of don’t. You agree, still be in the White House eyes of climate change activist. You think that the impact of this Administration can be undone then, but much as you’re done after 4 years of a responsibility, then after 8 years, do you think companies can have a greater impact than the government, Bremen, City and States as well to to collaborate now On to increase their efforts, there has been a ship recently or sort of an emphasis on moving the responsibility from the individual from the consumer onto the company’s and the governments. In other words, when I go into a Starbucks, I don’t want to have to be the one to decide not to use a straw. I shouldn’t even be offered this drop, so the onus on the individual needs to shift to a larger entity. Would you agree with that so you’re, a contribution is when you walk into a restaurant or a Starbucks having a huge role to play with and the government today what will be discussed at the UN during the summit and should people expect anything concrete to come out Of it, the representatives of the government, if we do not work, she and her generation publicly isotoners of the world about how they are going to on and on a whole day increase 80 % of America’s energy comes from fossil fuel. Renewable energy makes up only 11 %, so how can the US narrow that margin reasonable way without suffering, significant job losses for those who work in the fossil-fuel industries be so much cheaper? That is the fastest growing energy. You participated in the march on Friday in New York City, where thousand showed up Millions more rallied around the world, and it seems pretty clear that popular engagement of popular sentiment is on the side of fighting climate change. So why is the result so does Marc’s at this point, and also are you more optimistic now than you were in 2015 and too slow? We are definitely moving in the right direction: tribal, Christiana, figueres. We thank you so much for joining us. We really appreciate your time. Christiana Figueres played a key role the negotiations that led to the Paris Climate Agreement in 2015. She joined CBSN to talk about the significance of this week’s United Nations Climate Action Summit, what consumers and governments can do to help the environment, and why the situation is now “all hands on deck.”