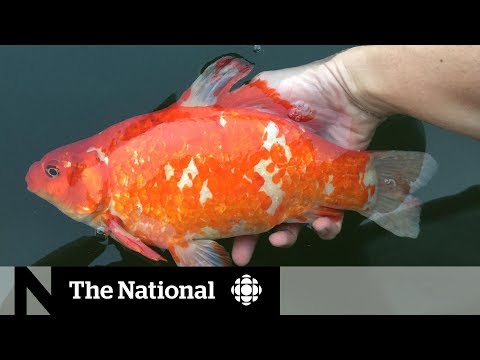 Giant, disruptive goldfish taking over Canada’s waterways Giant, disruptive goldfish taking over Canada’s waterwaysThey started taking goldfish in 2017, near Hamilton, Ontario Aquatic Research, biologist, Christine Boston and her team mission to rid the Waters of an unwanted and unwelcome Predator goldfish, and not the tiny, orange colored Variety in aquariums. These are not to be in a fishbowl getting into the Harbour either through Active Release. People are releasing their pets into the harbor or they’re getting into the pricing through people’s private ponds or stormwater management. Pond, that’s good for the goldfish, which are not only surviving but thriving. It’S doing well in our native fish aren’t doing well. It competes for the habitats that are fish need to spawn and reproduce generate a lot of vong turbidity in the water which decreases the water quality. Can you grab the force ups and pull that out for me called acoustic Telemetry that will help track and monitor their movements? So this tag is a transmitter in last 3 to 5 years. It’S going to admit a sound like a pulse every three to five minutes. It has a depth sensor on it, so we can tell what jobs the fish is at I’m at anytime, when this fish is swimming in the vicinity of one of our receivers. Your destructive and not much, is known about them. The team is hopeful, their work will shed some light on their behavior guys around the globe goldfish or invading lakes and ponds fishing because of goldfish infestations. So this is Cruise Paradise. This is the harbor just on the other side of the V way over here with Chelsea’s spike in the Goldfish population, as we can get to the front two fish and destroys habitat and precious spawning grounds. So, with the help of this multimillion-dollar fish barrier, the carp are diverted and that help decrease their population buy more than half, but at the same time Kyle says, there’s been an explosion of goldfish. I know even Marcel’s we’re kind of puzzled as to why you know the Goldfish are are coming up in such high numbers as they are. The Goldfish may be filling that Niche with a carpet been removed from lovable pets or undesirable test. Whatever the reasons for the Goldfish Boons scientist have One Singular message: don’t flush your pet goldfish, daughter’s, providing valuable data that could one day help restore these Wetlands Hamilton If goldfish are discarded in the wrong way, they can grow into destructive monsters. Researchers in Ontario have launched a unique catch and release operation in hopes of getting the upper hand.