Giuliani on bombshell IG report: Comey should go to jail 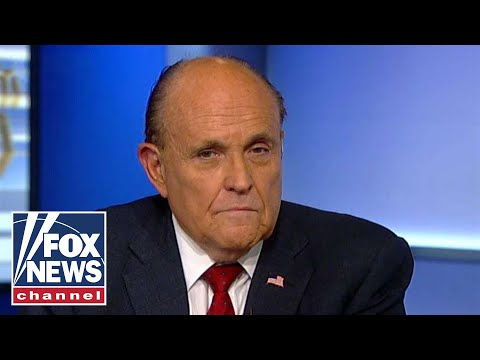 Giuliani on bombshell IG report: Comey should go to jail Giuliani on bombshell IG report: Comey should go to jailFormer FBI director, Jim Comey, expose today for being a liar a liquor and he’s always been a wimp take away from this report, which is exceedingly detailed. I think this report forget whether it’s a crime or not so the details, the worst director in history FBI broke every rule. I mean if you look at the Horowitz report, he broke every rule of the FBI. Now I think you should be prosecuted for him to say I didn’t leak he’s completely lying today. I didn’t know why the report demonstrates she’s lied to just said they’re, giving him a break. The basically saying, oh, you know, we shouldn’t price, could not enough evidence, but he lied. He leaked he’s a disreputable head of the FBI, he’s a disgrace to the FBI. He used it for political purposes demonstrates all of that running is Branch clappers idiot. If you want me to Guess Who, orchestrated this type is not capable of it briefing Trump back in January 2017 on that phone 8th June 2017 on the Steele dossier, important for me to assure him, we were not personally investigating him and I don’t want him thinking That I was breathing in on this disorder hanging over him in some way. I was briefing about it because we have been told by the media was about to launch. We don’t want to be keeping that from him, and I was very keen not to leave him with the impression that the bureau is trying to do something to him. Port said something totally different saying when this is interviewed by the oig also said that they discussed Trump’s potential responses to being told about this latest information, including make statements about value to the pending Russian interference investigation. Rudy is this evidence that Comey and FBI officials were trying to undermine Trump number one. It was a clear entrap hundred percent, clear entrapment by Comey who, despite his moral problems, is a very smart guy. Unlike Mueller who’s lacking an enchilada, this guy’s very smart. He was try to trap them like you trapped when it just like it. Any reputable prosecutor will be disgraced by that, so he was trying to trap the present, and it’s completely disingenuous for him to make these statements now. But who knows what the liberal media’s going to do with this? This guy is completely disgraced in the eyes of any FBI age. They realize this is worse than anything. I’Ve ever did when he walked in when the president was President elect and chased him with that. He was trying to tell him, I have something on you, so you better keep me in office and he even realized he was going to do with their other statements that make it clear that he realized he was going to extort the president of the United States. So I hope they prosecuted for the fisa go to jail case was a joke. I don’t, I don’t know Martha Stewart particularly she’s attack President Trump. I said at the time. This is a publicity stunt, but yeah egregious and damaging to the rule of law. Integrity of the Equal justice in a setup interview with agents or what Jim did for the last 2 years. The report should be like a teaching manual for the FBI. Don’T ever do this again. the thing that gets me Trudy as a first-year associate at a law firm in DC when do basic rules of Ethics as young lawyers to the department as a first-year prosecutor, you, you has been the week doing ethics review at the record Of sensitive Federal records, sequences memo to the file wasn’t found that doesn’t pass the straight-face test. Does it everybody? Everybody will think I’m making this up, but I’m disgusted I have been for over a year. This is disgraceful and because we have this crazy, Auntie Trump media. They making me know James Cardinal call me everything they’ve been against for years. The out-of-control prosecutor, who prosecute people for his own ambition. This guy is a disgrace, left or right, he’s a disgrace and he’s very dangerous and makay don’t at the shop you can afford to live for the 13 times. Okay, now it was a terrorist. They be going crazy already. Thank you so much great to see you and I appreciate you being a lawyer civil litigation, let alone I’m being a prosecutor. Cnn. Shame on you for not James Earl Jones voice over back President Trump’s personal attorney Rudy Giuliani reacts to DOJ inspector general report of the former FBI director. #IngrahamAngle #FoxNews