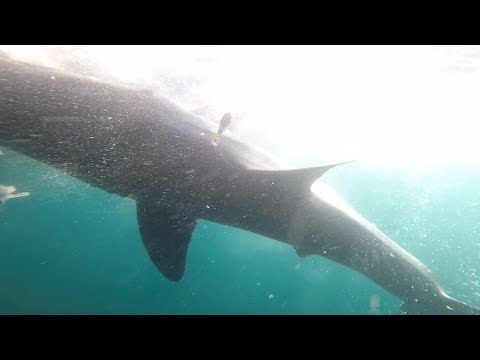 Great white sharks tagged off Nova Scotia coast Great white sharks tagged off Nova Scotia coastCanada is known the world over for its wonderful wildlife, and this next story is about a much-feared apex, predator patrolling the Waters of Nova Scotia us about the satellite tagging program involving great white sharks, the valuable information it is providing two Marine researchers there’s always a great White shark off Nova Scotia, but how much do we really know about what they do or where they go when they are here, Max’s Federal biologists have their Bowlby might have one sighting in one year and another sighting three years later or a Fisheries capture. 3 years later, and that doesn’t really tell you much about their habitat use in Canada and that’s where the tagging comes in tag to great whites with satellite tracking devices, one off Cape Cod, the other last July off for Mattoon along the South Shore of Nova. Scotia was the first ever tagged in Canada. Both sharks displayed similar Behavior myshelf last year, staying in the top 50 meters of the water column and traveling in a searching pattern to intercept pray that we were surprised that there was such good evidence of predation up here. Just that we could see that area is that we’d expect to be important to seals were also is where we are seeing the searching behavior of white shark and that they were staying so high in the water column and habitually returning to the same locations. In one case, just so the Sable Island and others off Southern Nova, Scotia anywhere, where you’d expect their prey be distributed. You’Re here more than a hundred great whites have been tagged off. Cape Cod of those four came to Nova Scotia last year. Most are likely repeat: visitors who have learned there is food here will be says, perhaps 5 % the overall population may come this far north, putting the actual numbers of great whites in the tens of individuals. They were able to different animals inside of three hours. So that’s sort of gives you a scale is we’re talking. We are talkin about low numbers again this year are continuing their effort to understand how many of these apex predators are in Canada and where they go when they are here, fall Werther’s CBC News, Halifax, Tracking devices on two great white sharks show them hunting for seals around Sable Island off the Nova Scotia coast. The Department of Fisheries and Oceans tagged the two fish with satellite tracking devices in an effort to identify “critical habitat” in Canada where they are listed as an endangered species.