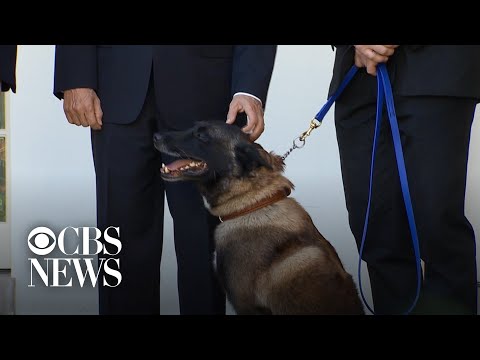 Hero military dog Conan honored for raid on ISIS leader Hero military dog Conan honored for raid on ISIS leaderToning emerged from the Oval Office tail wagging, the Belgian Malinois and it’s US Special Forces team had just been honored for taking out Isis leader, Abu Bakr al-baghdadi in Syria. Last month, Conan got a black and a metal hats on the head and scratches behind the ear. For a job well done is a tough cookie and a suicide vest and his dog was there suffered some injury. We were able to complete the Rave without any American Casualty of Conan has since recovered and returned to the K-9, served about four years with the military and has logged combat missions. Man have against Conan without the guns. What chance he would have. No chance water coding. Since details of the photo an American hero and got all the attention at the white house, because it’s special forces comrades, don’t allow themselves to be seen. Johnny Fernandez, CBS news in New York, A U.S. military dog that was wounded in the operation to take down ISIS leader Abu Bakr al-Baghdadi was honored at the White House on Monday. President Trump presented Conan with a medal and a plaque. CBS News’ Johny Fernandez reports.