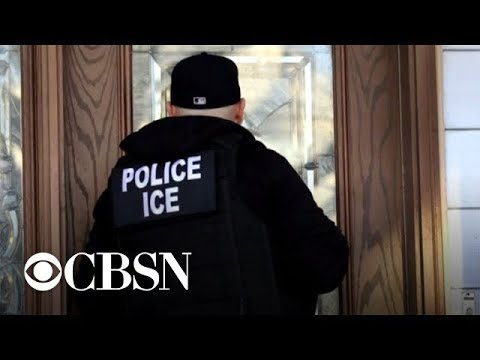 Highly-publicized ICE raids yield few arrests Highly-publicized ICE raids yield few arrestsAn operation Target run 2,000 on document and families in the US resulted in only 35 arrest. I said that the Roundup focus on undocumented immigrants, who were already ordered to be deported agency operations. Ongoing people with open removal orders joining me now from Washington is Camilo. Montoya Galvez he’s a politics reporter for CBS news.com Court results of this series of random targeting families. Again I would open deportation orders and well Reno. The figure suggests that the operation was even more limited in scope than expected ice agent arrested, 18 members of the family targeting and conductive 17 so-called collateral arrest. These are apprehensions of people who are undocumented about who were not directly targeted by the specific operations and remember Arena. Something important to note is that the agency was Target about. Two thousand of these families would open borders of removal. Immigration give it to deter these arrests. Were effective, the great question we know, we know that the presents threats of mass deportations prompted advocacy groups to mount his really unprecedented campaign to inform undocumented immigrants rights and to prepare them really for a potential and kind of ice agents. Although ice is not going to tell us how much that specific campaign hindered or derail their operations ice director acting director actually Matt Matthew, I told us today that some of his agents we’re surveilled during the sweeps. He said that produce safety concerns, but didn’t really elaborate on the expense or nature of the surveillance he cited, these undocumented families. Are they still bracing for more arrest? What are they saying in which thumb members are documented, but others are green card holders or even US? Citizens, these are specially children, and you know director Albans stress today to us that the operation is ongoing and that is Agent will continue Target these families with open removal orders routine operations which ice called cross-check operations. They target individuals with removal orders not necessary families and people with criminal convictions. Are the agency said today that it had apprehended nearly 900 of these Boulder Andy’s cross-check operation since mid-may office move and what’s really, the reasoning behind this important move for the administration is significantly expanding the number of undocumented immigrants it can Deport swiftly without a hearing in Immigration Court now that is key. The change, which goes into effect today, will allow a ice agents to apply the practice of expedited removal. This is a fast-track deportation process to undocumented immigrants who, across the country, who failed to demonstrate to an ice agent that they’ve been living in the country continuously for 2 years or more. So it is really a dramatic shift in the way the the so-called expedited removals have been applied in the past, because they’ve been applied, usually towards recently arrived migrants encounter by Ice agents near the u.s. Mexico border. Now, the administration sets of this will alleviate the backlog. The historic backlog in the Immigration Court System, but Advocates believe a new change will allow the ottoman to deport undocumented immigrants with deep roots and communities and who I’ve been living here for more than a year without offering them to process. So he think it’s rule. Change. Will facing legal consequences and challenges already pledged that it will file a lawsuit to try to stop it. Thank you very much for joining us. After a great deal of publicity, raids by Immigration and Customs Enforcement agents against some 2,000 undocumented families with orders of deportation resulted in just 35 arrests. CBS News reporter Camilo Montoya-Galvez joins CBSN with details.