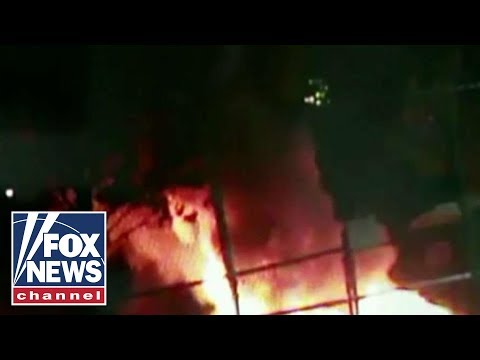 Homan shares exclusive video of attack on Washington ICE facility Homan shares exclusive video of attack on Washington ICE facilityYou mean wild this morning, exclusive surveillance, video from an attack. We told you about last month, I suspect, stormed at Washington State ice facility armed with guns and explosives. They call a Brazen and violent attack on a nice facility in Texas on 2. He was more on his exclusive video and details as retired ice director and Fox News contributor, Tom, home and Tom thanks for being here briefly, walk us through what we are seeing in this exclusive video Tacoma bacilli. First of all, he had a rifle. He was shooting numerous times into the building and then fire to a vehicle, and, if you here later, if his attempt to set parts of propane tanks in his effort to burn building down – and what was she dispensary shut, video shows is the violence involved in these Attacks night, if he would have been successful in burning that building down here, talkin about / 1400 live. She was 13 Annapolis silly along with a hundred employees. Thank God for the Tacoma PD about 39 seconds in the video you can hear them engage him in here. Numerous gunshot and thank God, that phone PD, their professionalism and quick response prevented the loss of hundreds and the live so hats off to them their quick response. If that was my that was, that was my purpose. Like I go to the op-ed yesterday, you know, since I even lost director, my family is threatened. I had armed security around my home 24/7, so they threatened my family. It’S just not against ice agency. In the people’s socialist, like this independent companies that work with us in the detention management, their employees are being threatened. This even gets to the point where the left eye has pressured major Banks to walk away from these companies and we can’t build facilities or or fund. These facilities so they’re attacking immigration – all are all sides and if I don’t understand it comes to actually do a great service to this nation, cuz 9 out of 10 of everybody ice arrests. Is it criminal either at the conviction for crying or pain? So these companies help keep our community safe, but it’s under attacking and I got blamed the Democratic hateful rhetoric that you hear from the squad. Aoac, the speaker of the house just bought everybody run for president on the Democratic ticket work. No more Nazis were racist or run concentration camps and they wonder why people are emboldened to do these types of things started by the tanks up in Washington State Center. He wrote in a Manifesto, I am antifa and that was all part of his greed against ice, but aren’t these contractors aren’t men and women ice the same people who were for ice and we’re contractors during the Obama Administration? What’S the difference now, You’re such hateful rhetoric against the Borg draw nice donate day in Bowling these type of tax in there quickly can done now pass on date and that we all should condemn it. They want to blame the presents a pyretic, my tongue right now. There’S a plenty of paper come from the left and we hear it everyday from the from the politicians and the media pack in the men and women who serve this nation. These men and women ice and Border Patrol enacted laws, and in that we wanted vilifying the minimum of the Border Patrol on ice, for you merely doing their job enforce laws enacted. It has to stop if they want to call out the president and those who Security Board, races and it in a week off what happened in El Paso, which is totally false. Then, where is your anger where it? Where there’s these attacks – and I saw that the shooting at in San Antonio from a shot into the building Mista nice employee by inches, it’s a matter of time before employees are born Collision or our families of one of our contractors – is killed. Murdered. And I don’t hear anything from the left on that. Former acting ICE director and Fox News contributor Tom Homan releases new video of fires set outside a ICE facility in Tacoma, Washington to show how the left’s ‘hateful rhetoric’ is threatening American lives. #FoxNews