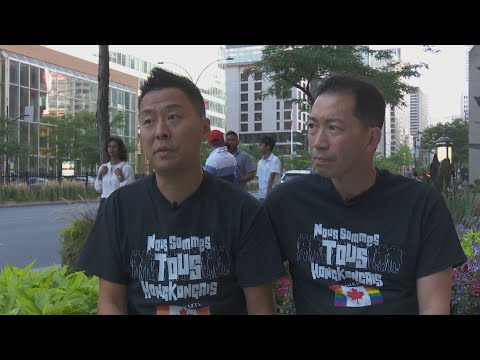 Hong Kong activists banned from Montreal Pride parade over security concerns Hong Kong activists banned from Montreal Pride parade over security concernsHenry lamb and guy who tied the knot in Vancouver 8 years ago, something they couldn’t do in their native Hong Kong, where gay marriage is illegal and I was coming to go public with his pride, both for his sexuality and he’s Homeland. He asked Montreal Pride if he and hope could lead a Hong Kong contingent in this year’s parade. 300 thousand people in the street just 24 hours before the parade, the bad news came. Pride was pulling them out who actually devastated and no actually call them back right away. That’S really saw an email, okay, not even a phone call. He was almost crying. What happened? What happened with pride thought the Hong Kong group participation was a security risk in an email sent to attempt to sabotage by pro-communist. In response to your participation, the message will be all taken out of the essence of a triangle. This summer, Hong Kong has been gripped by turmoil as pro-democracy demonstrators clash with police. The conflict is even spilled over Canadian cities. During Montreal Pride, a group waving Chinese flag interrupted a Moment of Silence by singing the Chinese Anthem. Lamb thinks they were there to counter his groups, presents listen to what that something like this would happen in Canada should have beefed up security instead of hating the threat and if they can express their gay pride and their Hong Kong pride in the streets of Montreal. A shame Simon air conditioning, CBC News, Montreal One day before Montreal’s Pride parade, organizers barred a group that planned to march in support of pro-democracy efforts in Hong Kong because of alleged threats from “pro-Communists.”