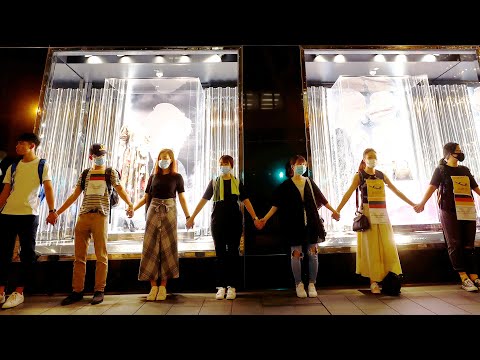 Hong Kong protesters sing Les Miz tune Hong Kong protesters sing Les Miz tuneWell in Hong Kong or Chris Brown came across a group of protesters singing a song of political revolution from Les Miserables AR singing. Do you hear the people sing songs from the famous Broadway musical are censored on streaming services in mainland China, but can be accessed in Hong Kong? The song has become something of a protest Anthem with lines like will you join in our Crusade, who will be strong and stand with me? Protesters are also using other tactics or Chris Brown has the latest developments going on tonight, how they look pretty much as far as the eye can see, stretching down one of the major roads here on the island of Hong Kong, a crowd lined up holding their phones In the air, with their lights, chanting slogans like free Hong Kong, your calling this whole event to Hong Kong road. Now this is to commemorate an event that happened 30 years ago, when the three Baltic Nations Lithuania, Latvia, we’re pushing for their independence from the Soviet Union. Someone came up with the idea, let’s recreate this as a bit of a celebration of that event, but customize at the Hong Kong. So that’s what’s been happening here tonight: songs of freedom from the musical Les Miz, so it really is quite a striking steam. Taxes have been driving by honking their horns, some of the large double decker buses at Hong Kong, double decker trolley that Hong Kong, well-known for people have been sitting on the top deck waving and cheering as well and some people. Some people even have flags of many countries around the world. Saying thank you to the International Community for the support. This is shaping up to be another big weekend of protests here in Hong Kong. Is a possible blockade going out to the airport on the highway to moral that could get tense, but here tonight increase ball. Arguably even happy Chris Brown CBC News, Hong Kong In Hong Kong tonight, protesters sang Do You Hear the People Sing?, a song of political revolution from Les Misérables that is banned in mainland China. Activists later formed a human chain they called the Hong Kong Road, a recreation of a similar protest for independence in the Baltic states 30 years ago.