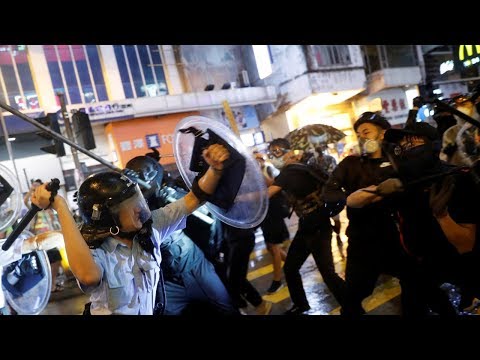 Hong Kong protests continue for 11th straight week despite warnings from China Hong Kong protests continue for 11th straight week despite warnings from ChinaWell now familiar seen unfolding in Hong Kong, but with a new level of tension, police drawing their guns on protesters at one point, demonstrators at them with sticks and Canes, as they have four weeks police try to disperse the crowd with tear gas and water cannon. He Showdown is the latest confrontation between between police and protesters. After nearly three months of anti-government. Weller, Chris Brown remains on the streets of Hong Kong right now, standing by as the protests unfold, he says today’s events took a very violent turn, while we’re here find event here in Calhoun tonight. It all started when a small group of Riot police officers confronted what appeared to be not a large group, no more than 50 or so protesters, but then in an instant. Suddenly their numbers swelled to maybe ten times that and the protesters took off and started attacking police, throwing things at them. Anything that they could find in the police were clearly in a lot of distress. At one point, I heard a gunshot not sure what kind of shot it was, but that push people. police took off and eventually took shelter in this building right here behind me, as you can see now, there’s a couple of hundred Riot Squad officers there, but it Took them a little while to get here, and there were people pounding on that door trying to get in so they brought out the water cannons tonight in an incident like this is definitely Mark some kind of an escalation in the violence that we’ve seen in Hong Kong Chris Brown CBC News, Hong Kong Massive pro-democracy demonstrations were held again today in Hong Kong, marking the 11th straight week of protest in the city.