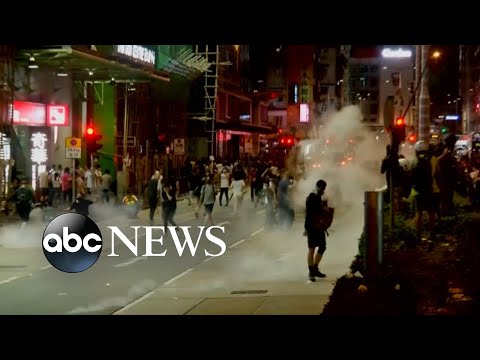 Hong Kong unrest continues as civilians hold public rally Hong Kong unrest continues as civilians hold public rallyAnd guys have been keeping you updated on the massive and sometimes violent protests in Hong Kong and now a student demonstration flooding the streets in our team was on the ground and spoke to some of them to take a listen. Not my family’s sacrifice my life for this movement because we have different countries and different people around the world are watching what the answering and washing the sacrifice my life chasing democracy and freedom of nature of human, and I only worry about my friends and family. There. Safety wow, so no one knows the endgame, but many are hoping for peas, unlike this 57 year old Frenchman, known as Spider-Man, who scaled a 62 story building and unveiled a banner that showed both the Chinese, an Hong Kong Flags kind of asking for peace. So what happens next Clayton Sandell? Is there with the latest Clayton the people rally? Thousands of people showed up to a park here in central Hong Kong. There are so many people they have now Spilled Out Here into the street. You can see the street is filled with protesters, they are power to the people, stand for Hong Kong. You can hear them chanting here. It is a hot and humid night here and they were packed elbow-to-elbow to call on the internet Community, especially the UK and the United States, to stand with Hong Kong and to actually sanction anyone who they say suppresses the right of anyone here in what was once A British colony first of several planned protests this weekend, many other processor happening, but the big one happens on Sunday that one is expected to draw 300,000 people, but a March That was supposed to happen at that rally has not been disallowed by police police, say organizers, Simply can’t keep people safe, but it’s expected that protesters will ignore the police and anyway, in defiance of authority. The question now, of course, is how the government supposed here in Hong Kong and incoming is Beijing coming as China will respond with talking or more. Fourth, we have a the last few days. Teen Forces massing on the other side of the Border here, no telling yet whether that is just amazing blocked her or whether the Army may actually be called in to quell some disturbing. I actually spoke with several University students today. All of them said they would die for the cause of protecting rights and freedoms here in Hong Kong that they say are being eroded by Beijing. Of course, everybody here is hoping that it does not come to that Kimberly. All right Clayton, we hope everyone stay safe out. There live event coverage click on the right over here to subscribe to our Channel and don’t forget to download the ABC News at 4. Breaking news alerts thanks for watching Student protesters and civilians held a demonstration Friday night and chanted “power to the people” in their push for democracy.