How Kim Jong-un Gets His $500,000 Mercedes | Visual Investigations 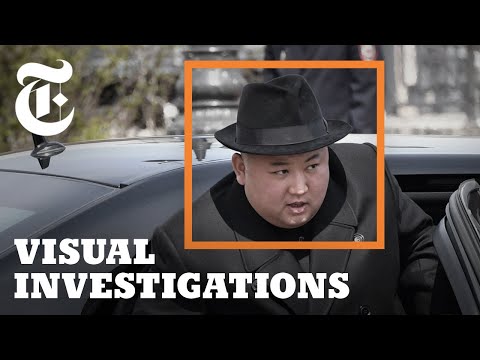 How Kim Jong-un Gets His $500,000 Mercedes | Visual Investigations How Kim Jong-un Gets His $500,000 Mercedes | Visual InvestigationsKim jong-in is becoming a more prominent figure on the world stage. He now frequently Leaves North Korea and welcome top officials in Pyongyang and I’m looking at the dictators high-profile public appearance. It would be difficult not to notice that they all shared something in common, Mercedes, Mercedes, Rolls-Royce and Mercedes vehicles, in open violation of international ban on luxury goods to North Korea, images and interviews. We investigated bulletproof Mercedes cost at least $ 500,000 and are primarily marketed to world leaders. We follow them through a circuitous network of Port, apparently designed to cloak their move and onto a ghost ship owned by a Russian businessman whose company has been accused of evading sanctions. Power story offers a glimpse into how North Korea’s first sanction and how it likely uses similar techniques to procure far more dangerous. The first, let’s take a look at the actual route and the trail starts in a shipping terminal in Rotterdam in June of 2018. The first part of the journey looks like a regular meant. Nothing out of the ordinary. The cars are in two of the containers on this ship. From here they’re transported on a major international shipping line. Azra 41 day Journey. The cars arrive in China. We tracked them to the port of Dallas, I’m here the car that ship to Japan and from there they are sent and yet another steps to another fork in Tucson, South Korea and hear the Russian own ship at the center of our investigation enters the picture. Containers and when it leaves the port mysteriously vanishes, turning off its required transponder 18 days later, the ship reappears, but now the cars are gone and instead Marion Cole. So what just happened? Let’S take a closer look at this Ghost Ship. Its handling a background offers Clues as to why it was not at all a regular transport. It used to be called Shannon gin, add links to North Korea, but shortly before it gets the card. It’S name changes to Dan 5505 and its ownership is transferred to joyoung shipping. A shell company in the Marshall island is still young shipping – that’s owned by the Russian national, but you never know it because it’s sales under the flag of the West African nation, Togo and Confused that’s the idea using that many jurisdictions is a class Extinction. Today strategy. China, do you see it it’s right here, satellite images we found suggested to try to pick up the cars at other ports in Asia, but the handoff have weeks later in South Korea. So where did the containers go Vladivostok, Russia and here’s? Why we think that first, the ship’s last reported destination before the transponder was turned off with a next to Vladivostok? We think the cars were offloaded in this area. Second, the owner of the Russian ghost ship is based in Vladivostok. His name is Daniel, Talbot took and he confirmed that he bought and sold a phone call to but offered no further details for months after the car has disappeared. South Korean officials seized to A+ chips, including the ghostship for alleged illicit trade of coal and oil with North Korea. Third, we tried these North transport planes, which made a rare visit to Vladivostok on October, 7th perfectly time, with the arrival of the containers they’re the very planes that normally carry Kim’s luxury vehicles and a possible direct Transportation link to North Korea. Our final clue in January 2019, the same exact model of armor by the website: North Korea news the route to Asia in Tucson, the North Korean planes. It’S not possible to save every part of this journey was elicited, but since 2016 sanctions experts say, North Korea has used similar techniques to bring in vital fuel sources and technology for its weapons programme, which raises the question: how effective are sanctions as a tool to pressure? Can jump onto end of nuclear ambitions? Kim Jong-un frequently shows off the Mercedes he has obtained in open defiance of U.N. sanctions intended to ban luxury goods from North Korea. Using shipping data, corporate records, satellite imagery and interviews, our investigation tracks the circuitous routes used to import illicit goods.