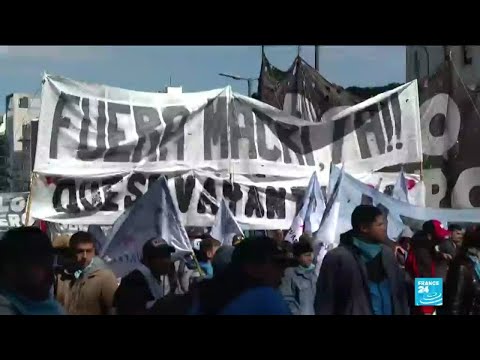 Hundreds of Argentinians take to the street to call for economic relief Hundreds of Argentinians take to the street to call for economic reliefUnions in Argentina are pushing for an end to austerity quickly. Less than two weeks ago they celebrated president Mauricio macri is lost in a primary vote. The centre-left it Alberto Fernandez unions are now pressing for austerity measures to be canceled immediately before presidential elections are held in October to solve the problem for us for months for a hypothetical government’s, we have to go out today to make our demands. Argentina has been mired in economic crisis, recession, episodes, inflation and unemployment for two decades austerity measures imposed over the past two years. Since the government took a 57 billion dollar bailout loan from the IMF have pushed more argentinians into paw. It’S estimated 1/3 of them are now living below the poverty line, while unions are pushing for government Aid. Investors are concerned at what could happen if conservative president macri Drew place for Alberto Fernandez shares a ticket with former president Cristina Fernandez de Kirchner. Since Fernandez won the primary vote, the peso has slumped. It fell by nearly 18 sent. Last week, Fernandez has tried to reassure markets. Although he’s pledging to alleviate austerity, he has ruled out letting Argentina default on its debt. Subscribe to France 24 now:
http://f24.my/youtubeEN

Protesters have taken to the street of Argentina to demand support for the most vulnerable in society amid a sustained economic downturn. One third of Argentinians now live below the poverty line and the country is subjected to an austerity bailout imposed by the International Monetary Fund. Shirli Sitbon has more.