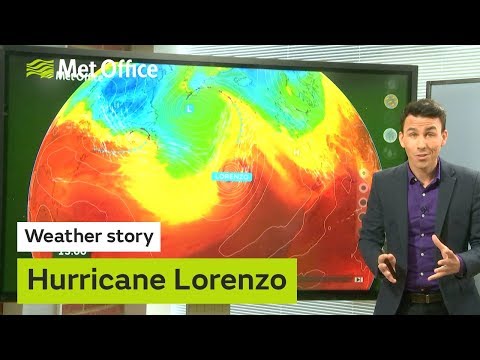 Hurricane Lorenzo – where next? 30/09/19 Hurricane Lorenzo – where next? 30/09/19This is Hurricane Lorenzo previously a category 5 hurricane. In fact it was the easternmost category five hurricane, on record for the Atlantic. Now a category 2 hurricane Lorenzo is heading towards the Azores. You may have heard reports that Lorenzo would impact the UK later this week. There is currently a lot of uncertainties, got., So take a look up. What’S going on here are the Azores, a group of Portuguese islands in the Atlantic, Lorenzo’s like you to bring the threats of hurricane force, winds, heavy rainfall and large sea waves, but it’s after Hurricane move, through the The Things become very uncertain way from Brave, warm Atlantic Sea surface temperatures shown here by Red is currently providing the fuel for Lorenzo Lorenzo moves away from it starts to decay. We need another source of fuel for Lorenzo, and that comes in the form if the jet stream and the uncertainties around Lorenzo come in terms of how quickly we picked up by the jetstream. What’S Northern parts of Europe and it’s at this point, computer models start to diverge. Some computer models send Lorenzo very quickly as a deep area of low pressure to certain parts of Greenland of the computer models. San Lorenzo as a decaying area of low pressure into southern island and then Southern parts of Britain. But what we consider like attracts Lorenzo at the moment as Annex hurricane is to move to the northwest of the UK. As a typical area of low pressure looks like expecting Lorenzo to start the UK to Thursday into Friday, and this is the expected position, so no effective UK If Lorenzo moves along this scenario, but because the scenarios, The Vaping so much at the moment, there is a Lot of uncertainty – and it looks like the remnants of hurricane Lorenzo – will bring strong winds because of these different scenarios. It is certainly was paying close attention to the weather forecast over the next couple of days on the details. Hurricane Lorenzo is heading towards the Azores and is expected to bring damaging winds, heavy rain and large waves to the Portuguese islands. But where will Lorenzo go then and could its remnants impact the UK? Met Office meteorologist Aidan McGivern takes a look.

The forecast and any weather warnings within this video are accurate at time of recording.

To ensure you have the most up to date weather information, check the forecast on www.metoffice.gov.uk or via the Met Office app.