Impeachment inquiry: Trump is making mockery of allegations against him 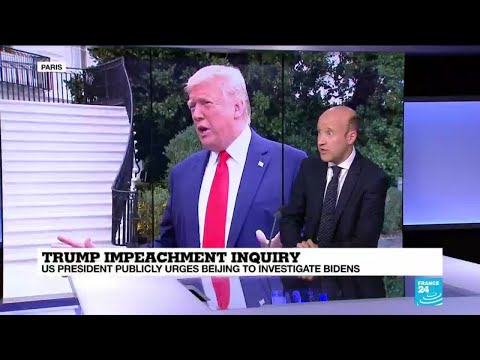 Impeachment inquiry: Trump is making mockery of allegations against him Impeachment inquiry: Trump is making mockery of allegations against himWhy would Trump blurted out so publicly yesterday about China and its potential investigation into the Vikings normal, the camera many said it 1.2 Rush us addressing Russia. Russia are you listening basically essentially calling on Russia to steal to hack into Hillary Clinton’s emails is absolutely unacceptable acceptable. I’M merely saying it publicly, but the fact of the matter stand. Donald Trump stands accused of beating calling upon foreign interference for his own domestic game against a domestic political rival, and that the investigators in the house are saying is an abuse of his oath of office. Of his constitutional oath, that has not changed, Publican Donald Trump still have his back. We haven’t had any Republicans are very few. At least a very few coming out is a lot of talking points talking points with your been created by Donald Trump, so narrative that is turning the tables against the Democrats or at least trying to buy basically making the case they still in the words of some Republicans have problems with the fact that Donald Trump was elected. This is not the talking points from the Republicans are not that this has anything to do about a constitutional, Congressional imperative incumbent on Congress. The president, if a whistleblower comes forward – and there are legitimate concerns of holding the presidential account whether or not the presence of his power, this is all about the Democrats. Tweeted. On the Democratic side, someone should inform the president that the impeachable offense that an impeachable offense committed on National Television still counts a lot of smoke and mirrors publicans or not, and they want them to come out office and that there’s not too much of room for Murkiness or ambiguity in there whistleblower potentially coming forward. It’S been a lot of talk about this for a long time about Donald Trump procedure. U.S. political history reporting that he was told – and this requires a lot of the Ukrainian whistleblower complaint – told that at least one political interfere in the annual audit of Donald Trump either the president or the vice president’s, not clear tax return. The other thing is supposed to be a non political process, free of any political interference. So if these allegations were, it would definitely raise a lot of concerns that those who do raise concerns are being a lot of pressure, is being brought to bear on them from Administration Trump Administration officials, officials, that is the whistle junk blow. His job is becoming harder. So the house you I can guarantee you this is another shoe dropping need to see more shoes drop dropping, but you can actually be guaranteed that even as the Trump Administration dismisses this newest whistleblower complaint as flimsy, the Democrats are going to go on the offensive as They have with the Ukraine whistleblower complaint and likely to called just discussing right now, whether or not to make this latest complained public to publish it. Subscribe to France 24 now:
http://f24.my/youtubeEN