In warning to Iran, Trump says he will “never fail to defend” U.S. interests 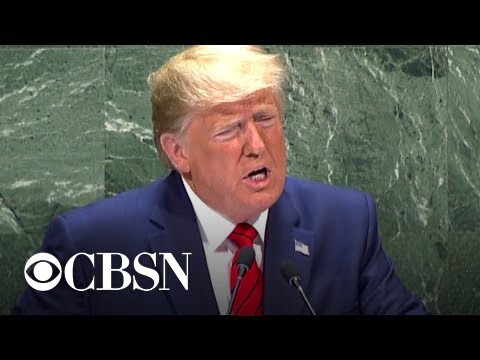 In warning to Iran, Trump says he will “never fail to defend” U.S. interests In warning to Iran, Trump says he will “never fail to defend” U.S. interestsUnited States does not seek conflict with any other Nation. We desire peace, cooperation and mutual gain with all, but I will never fail to do America’s interests. One of the greatest security threats facing peace-loving Nations today is the repressive regime in Iran. The regimes record and destruction is well known to us all. Not only is around the world’s number one state sponsor of terrorism, but it runs, leaders are fueling the tragic Wars in both Syria and Yemen at the same time same as squandering the nation’s wealth and future. In a fanatical quest for nuclear weapons and the means to deliver them, we must never I’ll do this to happen to stop a runs path to nuclear weapons and missiles. I withdrew the United States from the terrible Iran nuclear deal, which has very little time remaining, did not allow inspection of important sights and did not cover ballistic missiles. Following are withdrawal. We have implemented severe economic sanctions on the country, hoping to free itself from sanctions. The regime has escalated, its violent and unprovoked aggression in respond. Do Lorenz recent attack on Saudi Arabian oil facilities. We just impose the highest level of sanctions on Iran, Central Bank and Sovereign wealth fund. All Nations a duty to act. No responsible government should subsidize around bloodlust as long as it runs menacing. Behavior continues, sanctions will not be, they will be tightened. Around leaders will have turned a proud nation into just another cautionary tale of what happens when a ruling class abandoned Tous people and a box on a crusade for personal power and riches. For 40 years, the world has listened to a Ron’s rulers, as they lash out at everyone for the problems they alone have created. They conduct ritual chance of death to America and traffic in Monsters. Last year the country is supreme. Leader stated, Israel is a malignant cancerous tumor that has to be removed and eradicated. It is possible and it will happen. America will never tolerate such anti-semetic. A Fanatics have long used hatred of Israel to distract from their own trail use. Thank there is a growing recognition in The Wider Middle East that the countries of the region share common interests in battling extremism and deletion economic Opera. That is why it is so important to have full normalize relations between Israel and its neighbors. Only a relationship built on common interest, mutual respect and religious tolerance for a better future. I run citizens deserve a government that cares about reducing poverty, ending corruption and increasing jobs, not stealing their money to fund Massacre abroad and it home after four Decades of failure. It is time for a runs leaders to Step Forward, Unto stop threatening, add focus on building up their own country. It is time for the runs leaders to finally put the Arabian People. First, America is ready to embrace friendship with all who genuinely seek peace and respect. Many of America’s closest friends today were once our greatest foes. The United States has never believe infermon at enemies. We want Partners, not adversaries. America knows that, while anyone can make war, only the most courageous can choose peace. President Trump said that while the U.S. doesn’t seek conflict with other nations, he warned the Iranian regime that sanctions will persist and be tightened if they continue down the path of “unprovoked aggression” in the Middle East. Watch his remarks to the U.N. General Assembly.