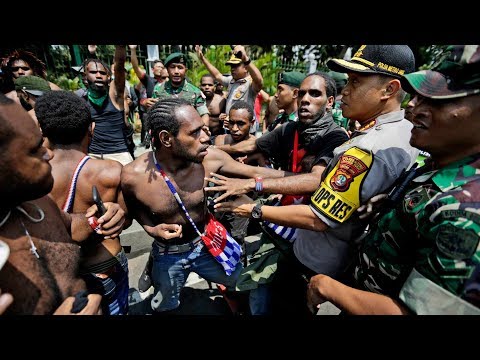 Indonesia deploys thousands of troops to Papua region to quell protests Indonesia deploys thousands of troops to Papua region to quell protestsA protester is dead. After almost a week of unrest in Papua Indonesia, protests were triggered after video circulated widely online, showing police backed by soldiers calling pop one student, monkeys and dog people. There are renewing calls for a referendum on their independence. In response, the Indonesian government has shut down the internet in an effort to restore peace, and more than a thousand troops have also been sent in to quell the protests. Papua is a former Dutch Colony that is ethnically and culturally distinct from much of Indonesia. It’S located on the far East of the country centered on the island of New Guinea, but it represents a small minority of the population of India. Papa was incorporated into the country in 1969, after un sponsored ballad that was seen as a sham by many joining us. Now is Benny Wenda he’s a West Papua independence leader and founder. The free West Papua campaign has been living in Exile in London, England since 2003, and that’s where we reached him this evening. Sir. Thank you for making time for us tonight. Let’S begin with the latest news for getting on the ground, which is that now a protester I’ve been killed in the ongoing riots that are taking place in this part of Indonesia. So story, that’s not been getting a lot of attention with the death of this protester. Do you think the world will finally start paying attention a cry for justice and freedom? We demand a referendum for Westbrook, want people to free from Indonesia bad because of the media, Fun by Indonesia, government amnesty restaurant at totally last 50 years, Tunisia, our audience and may not be as familiar with the story. Why is it that the West popular in the want independence from Indonesia illegally occupied differently, because we are different that is set for sure and linguistically geographically, a culturally? We are not connected, so we are connected with the people in the Pacific. So that’s why we? We are to give us freedom and Independence. We are not save more closely with Asia connected with the protest. Speaking with my people in back home with the telephone just without internet, they can, you know, send a text message and phone call and come out, and there is the last five days still continue. 20 years ago is Teemo Massacre. I don’t want that happened in West before, because 500,000 men or women has been kill. I don’t want you, you know another 5,000 or 400,000, again Debbie country, like Canada and America and UK and Australia. This you’ve mentioned the military presents. We got more than a thousand security Personnel who are moving in shutting down the protest. They describe what’s happening in West Papua as troublemakers in the streets, so it doesn’t seem like things are going to move bored in the positive direction, at least from your perspective. So what do you anticipate jakarta’s next move is going to be peacefully transition to flowers admonitory because we don’t have any. You know that my people to just coming out on the street this polly way from Jakarta to particularly president Jokowi pray that you go you’ve been living in Exile from your home since 2003 living in London, which is where we reached you this evening. What is happening now? Why is this issue sparking up in the area again right now, yeah, I almost 24 hours, I’ve been in my mind with my people contact in 24 hours and because last 50 years, no one knows because Indonesia initial get away with impunity, but this is what happening Now, Indonesia, military and police and the local militia group went to the student Elementary go home to West is because of last 50 years we had discriminate, as as like that, would I might sell the face in that discrimination so racism. That is why this is the truth. Okay, so we will leave the conversation there, but shouldn’t we keep watching the story. Thank you so much for your time this evening. Indonesia has deployed thousands of soldiers to the Papua region following days of unrest and protest, sparked by racist taunts aimed at a group of students last weekend.