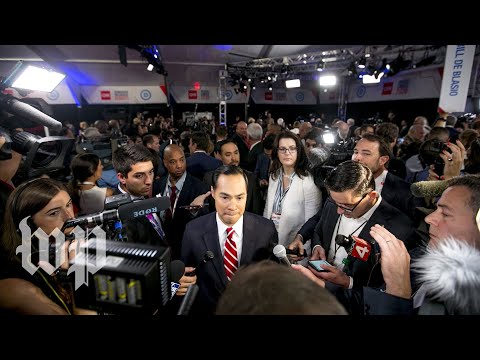 Inside the spin room, Democratic candidates talk immigration, health care and climate change Inside the spin room, Democratic candidates talk immigration, health care and climate changeIt is clear that Vice President Biden and others are running out of fear on the issue of immigration, they’re, afraid to say that we need to repeal the law that allows this truck castration to separate little children from their parents if you’re going up against the bully. Like Trump, who is bold and fearless, the answer is not to run out of fear. Somebody likes me, president they’re liking me to lead. That’S what I’m going to do. This campaign is going to be bold. It’S going to be Fearless. Donald Trump has not been bashful in his cruelty and I’m not going to be bashful in my common sense and compassion. I would end the federal marijuana prohibition. I would expunge people’s reference who have fallen victim to this archaic law that then place. It would end the cash bail system. I’Ve been opposed, and I am opposed to the death penalty – need to make sure that we continue to push to make sure that innocent person is held on death row. Unfortunately, Senator Kamala Harris is proud of the record that she had in California, where, when given the opportunity to get an innocent person off of death row, she fought from having that evidence to me as an American. That’S just unacceptable! That’S not the kind of thing that you have her from fighting for marriage, equality and being one of the leaders in in the United States. When many Democrats were talking about civil unions way back in 2004, I was performing marriages when you might fight for civil rights. Is included what we need to do for the criminal justice system? What we need to do to pass comprehensive immigration reform and I could go on and on so I put my reputation and my and my record up against anyone and frankly, I think that you know, as it relates to what we need going through. None of the United States actually working on these dishes is so much better than the one that Bernie and Elizabeth Warren and cam was proposed. Just because an idea is Big doesn’t mean it’s good. They have proposed. Literal literally raises taxes on the American people buy more than 3 trillion dollars over the decade. As I said, that is 70 % of what we collected in Revenue, the federal government, every operation that we do in the federal government. Today, it’s almost doubling the size of the of the revenue that we collect and the idea that we would say to people in America. What we’re going to do is take away the decision you make for your family faced. You know on your employer’s insurance and make you pay taxes on top of it. It just isn’t. Prior to United States, that’s instructive, decide who they’re, not? I am totally convinced we will be. The most unified Democratic party was ever been in part. We have because we have a white nationalist in the white house and we are bound and determined to remove him and make him a Flippin history. That’S kind of United’s big time. 2020 Democratic presidential candidates worked the media in the spin room following the second Democratic debate in Detroit on July 31. Subscribe to The Washington Post on YouTube: https://wapo.st/2QOdcqK