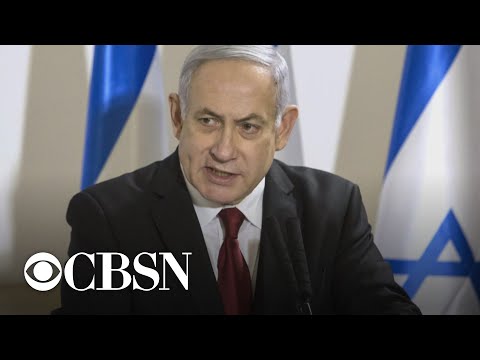 Israeli Prime Minister Benjamin Netanyahu faces challenge within his own party Israeli Prime Minister Benjamin Netanyahu faces challenge within his own partyIsrael we’re just days after he was charged with bribery in fraud, a key member of Benjamin Netanyahu makers to form a coalition government or face another general election Department in foreign affairs. Christina. Could this be the end for Israeli Prime Minister, Benjamin Netanyahu? I don’t know we always seems to sort of bounced back in a different incarnations. Successful politician in the country and he’s as longest-serving prime minister BB as he’s affectionately known, has had a bad year right. It started before the September elections with the announcement of these possible indictment on corruption charges and then did not get an outright majority in September, which means he didn’t have the muscle to bury the investigation or change the law to insulate himself against this. Now Israel has a split knesset, which is there. Parliament and Netanyahu has not only not been able to form he’s being charged with bribery, fraud and breach of trust, which is not only bad for him, but makes it even harder for these divided political parties to come together and form of government to actually run the Country we’ve heard here in this country and Christina’s, you know he’s calling it an attempted coup question, of course, is: is he likely to resign sisters have to resign? The Minister of Defense excetera, if they’re indicted on criminal charges the Prime Minister doesn’t have to but there’s president and it to others, have when they’ve been indicted under similar circumstances, pray for him stepping down, but legally he doesn’t have to end as we just talked about. Like he’s about to fight the charges, he’s called it a deep state conspiracy and a witch hunt somewhere. If that sounds familiar, it’s because the Prime Minister, as you both know, is a close friend and Ally of Fresno Trump and his emulating him. Trying to gather conservatives support an outrage, including from his own, the kids party, to help him stay in office. Reacting. Are there some defectors and the election of really complicated matters it again and got enough seats to run the government? There’S a good chance. He could have passed some sort of legislation to himself against. I will have to see how long is party is willing to put up with Natalie the Optics of him being indicted. What is an ability to govern because it’s some point, one of those two things is going to have to give increase in gas prices that have caused widespread demonstrations in Tehran has reacted forcefully, sometimes violently. According to some reports, sanctioned one that said, was responsible for the internet easier to do in a Ron than other places, even like China, because, although both governments control access to the web, they do it in different ways in a row on the system is highly centralized. But there’s less control over content where than China it’s more content base. The tap on basically turns off the pipe. Where is China a heavily filter, the water that goes through it? It does look, however, like a rounds back streaming again. A lot of different protests around the world in one can kind of threw sound like another one, but this one is Ben is back on again to organize in a bit easier manner or you know, what’s the implication of that, the government to see where they’re going Right and be there and it’s difficult because information of tightly controlled, I’m in some of the videos that have come out since the internet went back on, have been old and reposted. It’S hard to tell what exactly is going on where the a lot of chaotic situations the government has said. You know it’s: it’s not a the state-controlled media, controlled media they’re! Not talking about these crackdowns they’re, not talking about loss of life. Where is the only place, people can get that from people upload and post. So it is a double-edged sword, but it’s important for the protesters to be able to see what’s going on around around in their own neighborhoods Indore future renegotiation of the nuclear deal and make a change. The flipside argument to that could be. But if, if they run, is still busy trying to put down a political Uprising and its own country, the last thing they’re going to have time or bandwidth to do is go to Geneva and work out a deal to negotiate a deal. They’Ve already done and said that they want no part of it, so you can see it as an impetus for them to come back to the negotiating table, which is what the u.s. is hoping for, or you can see it as too much of a distraction for Them to even address it because they have bigger problems at home. Thank you. Beth Just days after Israeli Prime Minister Benjamin Netanyahu was charged with bribery and fraud, a key member of his political party is speaking out against the embattled leader. Gideon Sa’ar submitted a request to hold a snap vote for party chairman in three weeks, which is the same deadline for lawmakers to form a coalition government or face another general election. CBS News State Department and foreign affairs reporter Christina Ruffini joined CBSN to discuss.