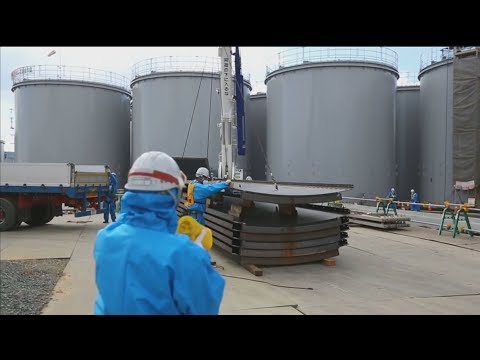 Japan to dump radioactive water into Pacific Ocean Japan to dump radioactive water into Pacific OceanA big story we’re watching overseas this morning the Japanese government says he will have to dump huge amounts of radioactive water into the Pacific Ocean. The only way it’s thanks to deal with all of the contamination at fukushima’s destroy nuclear power plant. Let’S go to Michael’s to Raffia with more on the aftermath to the tsunami, the earthquake and tsunami, because you mentioned this, the storage and not really seems to be the key issue here for Japanese officials and that’s because basic at the Tokyo Electric Power Company is already Collected over a million tons of contaminated water by 2022, where to put any additional water, which is why they’re now talking about dumping the contaminated water into the ocean. As you say, 8 years since the Fukushima disaster, an earthquake that triggered a tsunami of tsunami that sent water in Lance, that water damage the plants, power, delete system and it triggered a meltdown of the three cords. Now, since the days of the disaster, the nuclear cores have been kept cool by massive amounts of pipe water. That’S where all this excess contaminated water is coming from, but what to do with it? It is Japan, environment Minister says he can only see one option. Take a look at the statement from yokkaichi who says the only option will be to drain it into the sea, and diluted is Chief only the environment Minister’s opinion. He says the government is not completely decided as to what it will do, but the debate rages on and certainly the concern is being expressed. Of course, the games has been a lot of pressure on Japan to deal with this ongoing issue, and now we have this controversial reaction to this notion so far. You want this controversy to be dealt with before the games actually begin, but Greenpeace is already on record condemning this idea of dumping contaminated water into the ocean. They say this is short-term cost-cutting and not doing enough and the communities that rely on those. What is economically into that South Korea already submitted a senior Japanese Embassy official to clarify what Japan wanted to do with the water. They are urging Tokyo to exercise some Prudence here, even Fisher’s at home in Japan, they’re still trying to isn’t. She recovered a reputation of the fishing industry in Fukushima, so they are expressing economic fears, but despite all that., Despite all that opposition, this is an option has been debated now for almost a year. So it’s still on the table and as the environment Minister says, the other options seem to be much harder to pursue. Zorgan have to see where this one goes. More than a million tonnes of contaminated water has accumulated at Fukushima’s destroyed nuclear power plant and the only solution, the government says, is to release the water into the ocean to dilute it.